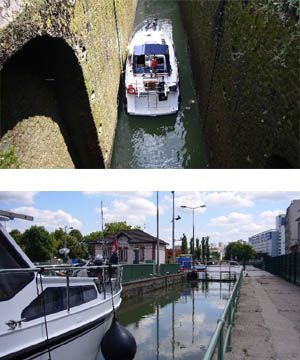 The pont de Flandre lock in Paris 19th arrondissement replaced the four flight locks of the first two locks on the canal Saint-Denis.

Work began in 1884 with the reconstruction of the former sixth and seventh locks, the latter also supported the Aubervilliers lift bridge (which then became a swing bridge no longer in use). Those responsible for the project thought of building two adjoining locks, each with their respective dimensions for two types of inland waterways : one 8.20 metres by 55 long ; the other 5.20 metres by 40 metres long, the latter corresponding to the Freycinet gauge (very precise dimensions applied to barges, defined by the law of 5 August 1879, the Freycinet plan). This solution facilitated navigation while at the same time reducing water consumption. Juxtaposition of the two lock chambers also allowed for better manoeuvering and the filling and emptying of the central lock wall. On occasion of these works, the number of locks was reduced to seven. The two flight locks of the first two locks situated in Paris were combined to make one single lock with a near 10 metre drop (9.90 metres) : the lock is called pont de Flandre. It thus replaced the original first four locks. A remarkable achievement, it held at the time of its construction, the record in France for the shallow lift. It was the third Freycinet lock built, after Réchicourt, on the canal de la Marne and the Rhine, and Crissey, on the canal du Centre.

The pont de Flandre lock continues to be a first-class piece of work since it now functions with the most advanced methods of technology. Thanks to a teleprocessing programme, lock operators can control the other locks on the canal at a distance. They ensure exchanges of information and instruction with the users, have visual control of the locks and can operate manoeuvers. The lock has its equivalent at the other end of the canal - la Briche lock in Saint-Denis. It is possible to visit the pont de Flandre lock.

Drancy Deportation Camp and Shoah memorial
Cruise from the Saint-Martin canal to the Seine : best of both worlds
The project house of the athletes' village in Saint-Ouen
The Saint-Martin canal: From la Grisette to la Villette
Seine-Saint-Denis Tourisme
140, avenue Jean Lolive
93695 Pantin Cedex
Tél. 01 49 15 98 98