Interesting places to visit in Epinay-sur-Seine 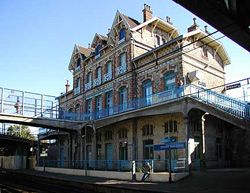 Cité du cinéma and its studios, Epinay-sur-Seine proudly recalls that the town once welcomed Rousseau and Diderot.

Epinay sur Seine comes from the latin word "spinogelum", later shortened to "spinolium", meaning an area covered with bushes and from “Sequana”, the Latin word for La Seine River. A chronicle relates that King Dagobert was ill in his domain in Spinolium in 638. Later, in the Age of Enlightenment, Madame d'Epinay was happy to welcome both Jean-Jacques Rousseau and Denis Diderot there.

Since then, the town that hosted the Age of Reason now welcomes those of cinema production. Epinay is known as the city of film industries with its studios where "la Grande Illusion" by Renoir was made and most recently "La Reine Margot" by Chéreau and "Les Visiteurs" by J.M. Poiré. In sports, the major event in the year has to be the “4 heures motonautiques” of international renown. In athletics, the first municipal sports school in France was created here and where, among others, the young champion Roger Bambuck began to train.

Epinay is also known for having hosted the conference of the new Socialist Party with Mr François Mitterrand in 1971. In the eighteenth century, the famous naturalist Lacepède owned a house here where the Eclairs studios now stand. Rose Bertin, the hat designer of the so-called "Montgolfier", built a country house here and where the music pavilion can still be seen, avenue de la République. Not far away, the city hall still retains the almost intact 18th century decoration of the former Ormesson hotel. On the west side, the windows’ architectural beaux arts style-mascarons represent the European, Asian, African and American continents. Continue on to avenue Joffre and visit the church Notre-Dame des Missions. It is classified as a historical monument. It was designed for the 1931 Colonial exhibition and was then rebuilt in Epinay.  It is a combination of styles borrowed and worked over from four continents.

The town benefits from an exceptional geographical location. It runs along the Seine River, about ten kilometers from the capital, at the crossroads of three departments and it has a transport network hub that makes it accessible from Paris, La Défense, Cergy-Pontoise and even Roissy international airport. Paris XIII and Paris VIII universities are both located near the city.

Epinay-sur-Seine is part of the greater area of Plaine Commune.