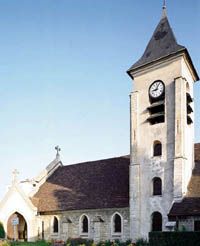 The origin of the name La Courneuve, curia noa, "new domain", refers to the colonists that Abbot Suger had installed in the village of Saint Lucien to affirm the predominance of the abbey of Saint-Denis on local agricultural land. In fact, a gallo-romain village must have existed in that place since the fourth century, as is testified by the gallo-romaine necropolis discovered in the north of the town. Vestiges of the ancient cemetery were exhumed in the current church grounds, leaving one to imagine that a Christian place of worship had been located at that same place in the seventh century (other archaelogical excavation sites in the area).

A first oratory was built in 1015 at the initiative of Robert le Pieux. But it is around 1180 that the primitive church Saint-Lucien was erected. It was placed under the patronage of Saint-Lucien. Dedication of this primitive building was probably made without any relic, as, at that time, it was enough for a place of worship to possess a fragment of cloth that had touched the bones or even the tomb of a saint in order to be consecrated. Under the impetus of abbot Suger, religious worshippers in Saint-Denis settled more than eighty new “hosts” in the former town. They planted, at the abbey’s expense a vineyard of eighty acres (about twenty-seven hectares), symbolizing thus the supremacy of the monks on these lands.

Who was Abbot Suger ?

In the thirteenth century, population increase allowed the village to become a parish town. But the Church was destroyed during the religious wars in the sixteenth century. Only the bell tower base survived and still remains visible today. The building was rebuilt in 1580. It has three naves whose foundations roughly correspond to those of the current building. A slab embedded in the wall on the right side of the entrance, testifies in Gothic script to the consecration of the Church in June, 26th, 1580.

In the eighteenth century, a new facade was added, and in 1839 a clock adorned the whole. The two clocks were placed in the tower in 1771. One, baptized Charlotte Françoise, in reference to the name of the famous lady, is the artwork of Louis and Charles Gaudiveau, members of a well-known family of art smelters who designed many of the Parisian bells. An inscription, made in melted wax, recalls the important characters of the former town, among them, Veran Gaulthier, the parish priest at the time of the French revolution, editor of the list of grievances of the inhabitants of La Courneuve on the occasion of the meeting of the Estates General in 1789. The second Bell, Marie Mathilde, was melted by A. Hildebrand, the emperor’s foundryman. The two "clam" holy water fonts date back to the eighteenth century. In 1929, the Church was enlarged. A new span was built to the west, the facade was modified and a new entrance was made.