What to see in Romainville

Romainville near Paris knows how to cultivate its urban culture in the middle of which stands Saint-Germain l'Auxerrois. 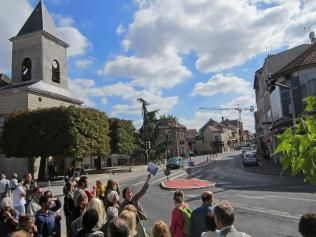 The name of the town comes from the Latin "Romanavilla", from Romanus, Bishop of Meaux and from Villa, the domain. In 1903, the Municipal Council ordered the inscription "Bois perdu, cité parue” which means - « Wood lost, city appeared » under the new Romainville coat of arms. This was done for the sake of history, no doubt, to preserve the memory of the famous woodlands and to assert the will to build a town, thirty six years after the creation of the town les Lilas, which had amputated Romainville of a portion of its territory.

In 1990, the new motto was "When a town is also a village". This time to mean that the town so much hoped for earlier in the century had been built in place of the orchards in the village, of the vineyards on the sunny southern slopes, and of the crops on the plaine des Bas-Pays. Thus the former rue de Paris still leads to the town hall and the church via the farm « Nicolas the gardener ».

A Louis XIII style castle and place of worship

The castle of the lords of Romainville, in Louis XIII style, was built by Nicolas of Quelen around 1630. The last owner, Philipe Henri de Segur was minister to Louis XVI in 1780 and Marshal of France in 1783. The castle welcomed well-known people such as the painter Elisabeth Vigee-Lebrun. Today, only the double east wing remains (XVI century), hidden by a building added in the nineteenth century and to which was attached a brick house (XIX century). The park was transformed into a gypsum quarry in 1848. The castle was bought by the town in 1988 and an association is attempting to save it.

The church of Saint-Germain-l’Auxerrois built in 1787 by Brongniart, was listed an historical monuments in 1929. This Neoclassical architecture has a large vaulted nave supported by Doric columns with a large square choir endowed with a semi circular abside flanked by side aisles. One can see a Virgin with child in polychromic stone dating from the XVI century, oak stalls also dating from the XVI century on either side of the choir and a stone Virgin and child dating from the XVII-XVIII century. Here lies the tomb stone of Louise de Ségur.

The town hall was built in 1873 by the architect Lequeux, and was enlarged in 1905 with the addition of a hall for ceremonies and events decorated by Jean-Joseph Enders. The wedding hall features four paintings made in 1917 by Maton-Wicart on the theme of families and weddings. The statue of Danielle Casanova built in 1956 is the work of the sculptor Georges Salendre, it evokes heroines of the Resistance and the first convoy of women deported from the station Fort de Romainville in January 1943 to the Auschwitz camp. Restored in 1994, this former school Abbey Houël is today the school college of the same name. The former building, constructed in 1870 by the architect Lequeux as a public school for girls was protected. It has a remarkable facade.

Visit Romainville : The church Saint-Luc-des-Grands-Champs (1931) concrete facade and brick cladding, the dispensary Louise-Michel (1936) in brick and decorated with bas-reliefs on the theme of medicine, the ensemble of HBM modest housing complex dating from 1936, the school Charcot-Barbusse, red brick, with bas-reliefs by the sculptor Rondest.

What to see around Romainville: various visits are proposed all year long in the territory of Est Ensemble and Seine-Saint-Denis. Participate in open days : company visits, urban walks, navigate on the Canal de l'Ourcq, enjoy the backstage of shows and concerts.

Practical information Romainville : Consult our pages on accommodation if you are looking for a hotel near the town.

For administrative purposes, consult the official website of the town