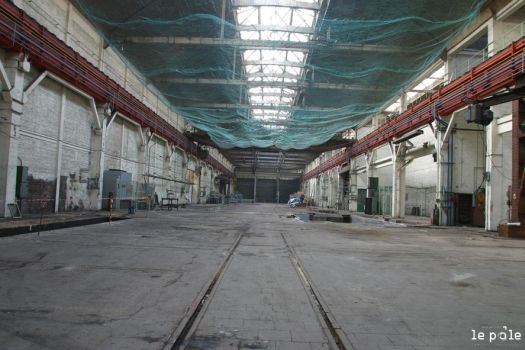 The American company Babcock & Wilcox, which was created in 1867, specialized in the making of industry boilers. After creating their first French subsidiary in 1881 at Clichy-la-Garenne, the company wanted to increase their production capacity in France. They moved their workshop in 1898, to the building, la Société des fonderies et ateliers, in La Courneuve.

A typical administrative building from the Modern Movement era

Babcock & Wilcox was met with growing success in France and continued to gain markets. It became the first manufacturer of industrial boilers; they equipped practically almost all the large French thermal power stations, but also specific companies such as Grands Moulins Pantin or the distilleries Cusenier at La Courneuve. The number of workers continued to increase each year and, from 540 employees in 1914, Babcock & Wilcox were employing 800 in 1936. This success obliged them to expand. Initially, and for twenty years, the company built several workshops, here and there, without any coherence, incrementally due to their acquisition of land. It was only in the early 1920s that Babcock & Wilcox decided to reorganise the installation of their factories. 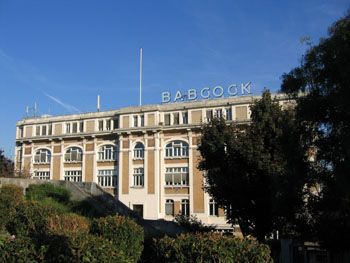 Not far from the new factory chimney, put up in 1915, the buildings with the concrete structure and brick-filling regrouped the boiler and forges. Opposite them, new foundry workshops were added to the former set. The foundries, halls with metallic brick-filled structures lost their extreme north side during the construction of the motorway A86. Finally, at the entrance of the site, hiding the chaos of the central park and indicating the success of the company stood an elegant administrative building. Expansion continued in the aftermath of the Second World War and the American Company employed 1,390 workers in 1947. To this date, the company covers 93, 000 m2 of land spread out over three blocks, along Rue Emile-Zola, Rue Raspail and Rue Krüger, making up one of the largest industrial monopolies at La Courneuve and became the first employer of the town. Babcok & Wilcox became once again cramped in its La Courneuve premises. But high urban density developing around made them consider leaving La Courneuve.

Their main client, Electricity of France, encouraged them to stay by ordering new boilers, all the more powerful to be able to provide the necessary energy for France, a country under important reconstruction. Some new forge workshops, boilers and laboratories were constructed in the 50s. Among all these additions, the most remarkable architectural element is the administrative building, constructed in 1923, at the entrance of the site. The edifice, made up of three floors in the beginning, was raised one more level in 1929. Filled with white concrete ochre-coloured brick pilasters, this marked a contrast to the standard red bricks used at that time for industrial buildings. On the facade, punctuated with large windows, runs a large mosaic frieze, decorated with mouldings. Two cartridges, also in coloured mosaic, contain the initials of the company, B & W. The general appearance of the façade and its roof terrace make it a typical Modern Movement building just like the Bobigny Illustration printing press or, to a lesser extent, the principal building Aciéries of Champagnole.

From production to event organising: what is the future of this site?

The number of employees in the factory reached its peaked in the 1960s when they worked in parallel with the Chantiers de l'Atlantique (1600 employees in 1969) before being confronted with the issue of social plans and severance schemes. Indeed, the new energy policy orientations initiated in the early 1960s to which the oil crisis of the seventies was added, signed the beginning of the decline of Babcock & Wilcox. EDF replaced the fossil fuel thermal boilers (coal and fuel -oil) by nuclear boilers, forcing thus the American company to rethink their approach to manufacturing. Despite significant export production, reduction in the number of orders had a direct impact on the number of employees. Between 1967 and 1978, despite the merger with Fives-Lille-Cail (the company that built the vertical-lift bridge at Rue de Crimée), the number of employees from the group Fives-Cail-Babcock was reduced by two-thirds, from 1,450 to 530 persons. As a result of long purchasing policies and merging actions, Babcock & Wilcox, became Babcock Enterprise, becoming a 100% subsidiary of the Mediterranean Industrial Construction group in 1989.

Progressively, the site at La Courneuve was reduced to maintenance activities and boiler repairs, even though it still conserved important study bureaus and small manufacturing units. After that, the production unit completely deserted the buildings which were then used as warehouses. Today, the site of Babcock is focused on maintenance activities, engineering and commercial services. The venue is regularly used for film making and fashion shows. In November 2008, the Renault-Nissan group presented the Nissan Qashquai, its new 4x4 that allowed the heavy sliding metal door to open to 300 journalists. In 2016, MC 93 proposed shows in this industrial friche - Babcock. The question of its future still remains.