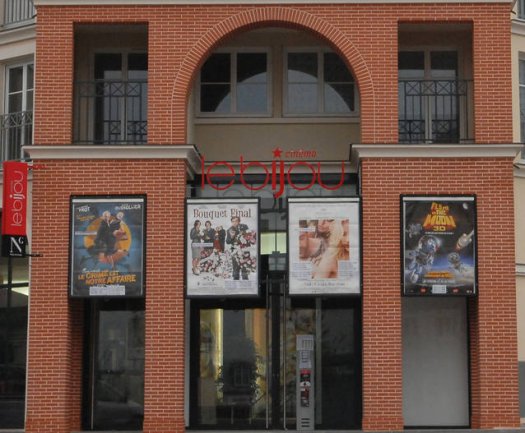 Le Bijou cinema and its three movie theatres, opened in 2008 and was officially inaugurated on 27th September 2008. The creation of Le Bijou cinema was part of the complete renovation programme of an area in Noisy-le-Grand (Carré Renaissance). Doted with three movie theatres and a capacity of 416 (252, 82 and 82 seats), movie theatre N° 1 equipped with digital, is one of best in service for  arthouse cinema in Seine-Saint-Denis. Films in 3D.

The team working at Le Bijou cinema intend to make it a place of animation. In the programme : films for all, films in the original version and recent arthouse movies, a specific program for a young public, animations, as well as focusing on jobs within the cinema industry. Links have been created with the National Louis Lumière School. The cinema is part of the network Cinéma 93.

All movie theatres are accessible for people with reduced mobility. The main theater is equipped with audio induction loops for the hard of hearing. Cinéma Le Bijou Noisy-le-Grand is open all year round.