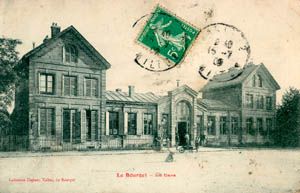 Two stations, one close to the other, are situated in Le Bourget. They are on the same railroad line, near an important rail marshalling yard and on a line connecting the networks along the “Grande Ceinture” (Great Belt Link)  and one of the networks of the Northeast of France. This network connects Gare du Nord station to Soissons and over to the Belgian border.

The station of Bourget-Drancy (RER B) is today served by the line connecting the gare du Nord station to Soissons. This line built between 1860 and 1864, by the northeast railroad company was known as “line of the Plain” (Saint-Denis) to Hirson.

The station built at this time was completely destroyed by the Prussians during the Franco-Prussian war in 1870. It was reconstructed in 1871.

The deportation convoys for Auschwitz

The station was renovated in the 2008 RER B NORD restoration program. The main building was renovated, elevators were installed and platforms were modernized.

Sources: the Association for the History of the French Railroad. Bruno Carrière and Bernard Collarday “Adventure of La Grande Ceinture”.
Thomas Fontaine-Guillaume Tozer, “The stations of deportation of the Paris region”