Condorcet Campus is one of the projects that will be included in the Greater Paris area. This university campus will spread out over Aubervilliers, Saint-Denis and Paris. It should be finished in April 2019. This ambitious project concerning this university centre and dedicated to humanities, is led by a dozen or so partners including the Parisian faculties Paris I, Paris III, Paris VIII et Paris XIII. 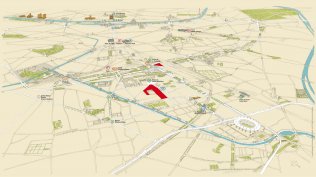 Demolition works began on the site Porte de La Chapelle during the summer of 2015 and ended in 2016. The zone where Dubois station used to be will accommodate thousands of students, bachelor and master degree courses with University Paris 1 Panthéon-Sorbonne, a CROUS (student information centre) restaurant and a branch of "la Maison des initiatives étudiantes de la Ville de Paris" - centre for the development of student initiatives. 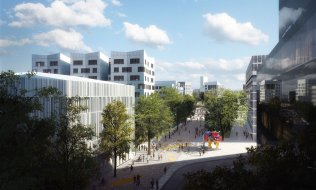 Condorcet Campus in Aubervilliers will occupy a site measuring 6.4 hectares of which 160,000 m² (Shon) will be built upon. This site will accommodate 12,650 people from 2019 on. The design and construction of the 50,000 m² was entrusted to the consortium "Sérendicité" (GTM Bâtiment, 3i Infrastructure PLC et ENGIE Cofely). This zone will include the headquarters of the "Institut national d’études démographiques" (Ined) – French Institute for demographic Studies, research and training areas, a conference centre, a residence for guest researchers, a project hotel, support equipment for life on Campus, 450 student accommodation options, several dozen research units in humanities and social science.

Condorcet Campus in Paris, Porte de la Chapelle will mean 20,000 m² of constructed space (Shon) over 1 ha of ground space. It is planned to accommodate 5,165 people.

The State, Ile-de-France region and Paris town authorities are financing this project. The "Établissement public Campus Condorcet" - Condorcet Campus public establishment is responsible for this project.