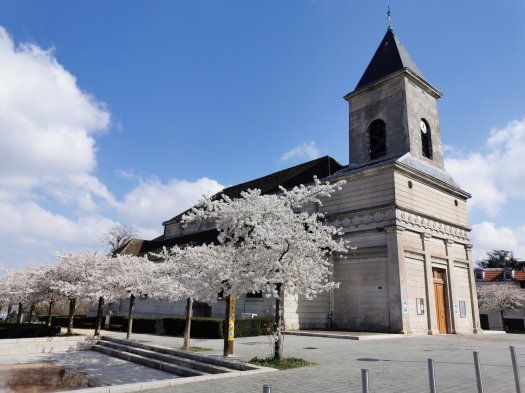 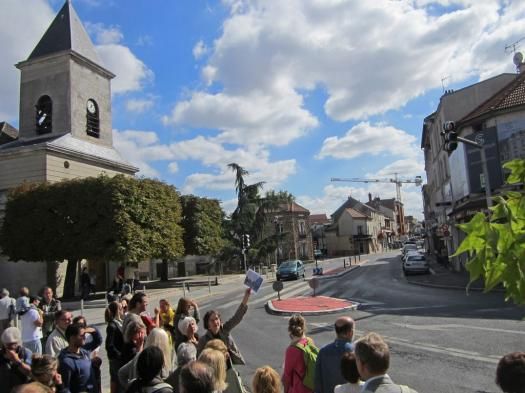 No vestige of the XIIIth century church of Romainville remained. It was put under the protection of Saint Romain, Bishop of Meaux in the eighth century, and gave the town its name. The construction of a castle in the seventeenth century, housing the lords of the domain, such as the Ségur family who was to occupy it in the eighteenth century, led to a sharp revival of piety in the village. A new church was built under the direction of a famous name in architecture, Alexandre Théodore Brongniart.

Exiled, the former parish priest of Romainville bequeathed his possessions to the city

Abbot Houël (1756-1823) was an important man in Romainville. He was respected by all the inhabitants of the village where he was not only parish priest, since 1782, but also the doctor. He was elected mayor in 1790, when parishes were replaced by the municipalities at the time of the reorganization of the country by the revolutionaries. An influential man, abbot Houël, was supported by the marquis of Ségur, when he decided to build a new church for his parish. Using his contacts, the marquis succeeded in having the plans of this new religious building to be made by the architect of the king, Alexandre Brongniart. After the Revolution, the abbot had to leave France quickly and took refuge in Florence. Openly displaying his revolutionary ideas and showing a great deal of liberality in his religious functions, he was repeatedly banned from entering the dukedom of Tuscany. He died in Florence, and was buried in the convent of the Annunciation. Before his death, the Abbott Houël made a will in which he bequeathed all his fortune to Romainville.

Just like all constructions by Brongniart, the new church in Romainville was also of neoclassical style, erected in a simple basilica plan. The building, begun in 1785, was inaugurated on December 20, 1787 and was placed under the protection of Saint-Germain, Bishop of Auxerre. The central nave, barrel-vaulted and arched, was finished off with a small square shaped chancel with a semi-circular apse. This nave was flanked by two aisles with horizontal ceilings each one completed by a chapel. The three bells of the primitive church were reintroduced into the bell-tower Saint-Germain of Auxerre but, during the Commune in 1871, the bells were melted down and made available to the defence during the war. They were replaced by four other bells of smaller dimension. The bell chimes of Saint-Germain of Auxerre were different for funerals according to the gender, age or even the quality of the person buried here. Saint-Germain of Auxerre contains some interesting antiquities for several reasons. The Virgin and child, sculpted in polychrome stone, dating from the sixteenth century is probably the most important piece in the church. Placed in the chancel, beside the statues of Saint Louis and Saint Joseph, its identification was made hazardous.

In the early twentieth century, the statue was placed under the guidance of Sainte Geneviève even though her usual attributes (candle and crook) were absent. It was restored in 1978 and the restoration revealed the presence of a crown and beneath the folds of a coat, the foot of a child. It turned out that initially it was the statue of the Virgin and child. Today, it has regained its original aspect. At that same period, during the sixteenth century, Saint-Germain-l'Auxerrois possessed oak stalls. According to tradition, these stalls were situated on either side of the chancel. Indeed, during religious ceremonies, this was where ceremonies took place around the altar, and where the clergymen sat, in the stalls. Recently, another Virgin and child, located at the side-aisle of the chapel, dating from the  seventeenth and eighteenth centuries, seems to be the replica of a work by Edme Bouchardon (1698-1762), creator of the equestrian statue Louis XV in Paris. We have traces of this sculptor in Seine-Saint-Denis for, in the Saint-Sulpice church of Aulnay-sous-Bois, two angels and a wreath had been attributed to the school Edme Bouchardon. In the west chapel, opening onto the sacristy, a statue of the Child Jésus at twelve years old was offered by the sculptor’s mother - Nicolas Aublet (who died in 1860).

Residence of the Ségur family in the Romainville castle was important for its construction and also for the maintenance of the building. Recently, a tomb was found to the left of the choir. If, during excavation, the tomb was empty, some of the members of the Ségur family had probably been buried there, as is suggested by the epitaph of the funerary slab which closed the crypt. Severely damaged, its restauration revealed the following inscription: « Here lies the most high and powerful lady Louise-Anne-Magdeleine of Vernon, spouse of the most high and powerful lord Philippe-Henri marquis of Ségur. »

The famous woman of letters, the countess of Ségur, each year offered a trousseau to the most virtuous girl in the village, elected on the occasion of the Rosière festival . She died in Paris in 1774 and it seems that the countess de Ségur was buried in the church of Saint-Germain-l’Auxerrois at a later date. Among the liturgical objects of the church of Romainville, the parish has kept a richly adorned monstrance dating from the first Empire the shape of which, a crown of rays, appeared in the sixteenth century. The Parish has also preserved several manuscripts of Gregorian chants from the 19th century. The music score of one of them, dated from 1820, was « written by Chandora, bass Notre-Dame de Paris ». Another manuscript was discovered by the bishop Grisel. Written in Gregorian, it contains the text of the service of Saint Romain, written for the consecration of Saint-Germain-l'Auxerrois and chanted for that occasion in 1800.

Recent windows in a simple and popular style 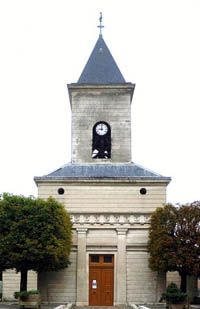 During the inter war period, Louis Dory, a descendant of one of the oldest families of Romainville as one of his ancestors had been municipal councillor from 1794, financed thirteen stained glass windows for the church of his parish. They were designed by the master glassmaker Guevel. On April 18, 1844, an Allied Bomb, targeting the station Noisy-le-Sec, hit Romainville destroying a large number of houses as well as all the stained glass windows of the church. After Liberation, Guevel and Dory came together to finance the new stained glass windows. These ones relate the main Christian themes but also the life of the parish. Thus, we can see the parable of the Good Pastor, Jean and Luc but also of the Bishop of Houël who wrote his will in favour of Romainville. Guevel’s work could be considered as  simple and popular.

Consult our list of religious edifices in Seine-saint-Denis such as the churches of Saint Christophe in Coubron and Saint-Martin in Sevran.