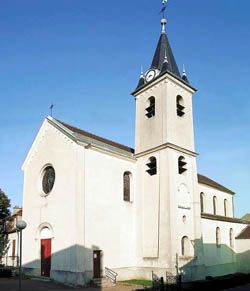 Coubron is one of the oldest villages of Aulnoye and was constituted as a fiefdom from  the eleventh century. The parish of Coubron's first church is mentionned in a text in 1201 even though it's size is quite modest. Destroyed during the French Revolution, it became a place of worship again in the nineteenth century.

Coubron belonged to the Lord of Montfermeil

By the time the Revolution sprang, the domain of Coubron belonged to the farmer-general Hocquart whose family owned some land in Montfermeil. The steeple in the first church of the parish, which remained intact until the Revolution, sheltered four bells. The Revolution broke up the Hocquart lands. The sans-culottes stripped the church of three of its bells and seized a large part of the liturgical furniture. In the early nineteenth century, the church became a place of worship. A new building was built, in 1854, in a modern style but preserving the initial plan of the old church.  In 1881, the bell was raised and a sundial decorated one of its sides. Since then, the edifice has not undergone any significant changes.

Some pieces of the old church, spared by the Revolution and classified since then as listed monuments have been kept in the new building. All the same, a wooden retable has not undergone serious  alterations since it was installed in the church in the early eighteenth century. Only a Crucifixion, replaced the Descente de Croix in 1899 which made up the central panel. Surrounded by four figures of Saints or prophets, the table is topped by a corniche supported by little cherubs in the same way as the  caryatids. Two small panels also from the eighteenth century, frame the tabernacle with golden and coiled columns. They represent  Marie-Madeleine on the left and saint Jean-Baptiste on the right. A small statue of a saint or prophet, dating from  the eighteenth century, is represented in a framework ornamented with a pastoral garland where fruits and leaves are intertwined evoking the four seasons. Two oil paintings canvases are attributed to François Guérin. In 1783, the priest of Coubron ordered nine religious canvases from this famous painter, a member of the Royal Academy since 1761 and known for the popular scenes he painted  in Paris in the 1770s. It is highly probable that both canvases kept in the new church of Coubron, a Présentation au Temple and Sainte Famille, belonged to the series of nine commanded by the priest. They are classified historical Monuments.

Finally, the statuary of the nineteen century is present in the church Saint-Christophe with a Jésus parmi les Docteurs, painted in 1890 by Raoul Larche (1860-1912) who resided in the village at the end of the nineteenth century. He is not the only artist to have been seduced by Coubron including the writer Paul de Kock (1793-1871), who, even though living in Paris and having had several residences in les  Lilas, chose the name of the village to situate one of his books published in 1843 with the title: The School Master of Coubron.

Consult our list of religious edifices in Seine-saint-Denis such as the churches of Saint-Germain of Auxerre in Romainville and Saint-Martin in Sevran.