Visit Coubron (Seine-Saint-Denis), a small town on a human scale 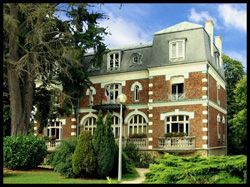 Coubron and its Coubronnais have primary concern for the conservation of their nature parks which makes it beautifully green.

Its name comes from "courtberon" or "courtbron" for courtil, the garden, and Breo (nis), the name of a farmer. With its 183 acres of woods and forests and ninety-two acres of agricultural land (check out the Nothern Paris's agricultural areas), Coubron cultivates a rural nature highly appreciated by its inhabitants. This village consists mostly of individual properties, and some proximity shops which shape its town center. The concern to preserve its natural heritage is the underlying factor with which all Coubronnais are in agreement; it explains how the whole city continues to invest in the struggle to save Bois de Bernouille  which is threatened by opencast gypsum. After many meetings, the decision to preserve the wood permanently is taken, all operations on it will be “sheltered”.

Ramble: PR21 in the footsteps of Corot in Coubron

A ZAD “(Zone d'Aménagement Différé) a future-integrated development zone”, of 120 hectares, committed to create a natural and recreational area was created in 1986, where six hundred grapevines were replanted, resuming ties with a distant past. In parallel, the town founded the guild: confrérie des Compagnons du clos de Bréon. Despite its modest size, Coubron features great sporting and cultural activities. Three main rendezvous rhythm the communal life in Coubron : the spring or autumn flea markets, the “village fête” - end of June. Twinned with the German city Berkheim since May, 19th 1991, Coubron also participates in some traditional celebrations such as marché de Noël which has gradually become common place in Seine Saint Denis.

Find your hotel near Coubron
Official website of the town