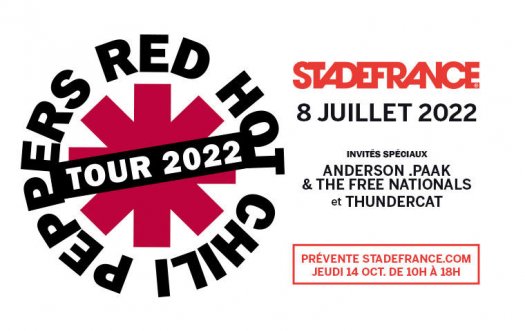 The American rock band Red Hot Chili Peppers will be in concert at the Stade de France in July 2022, almost 10 years after their first visit in the stadium. The RHCP music cheerfully mixes rock and funk with a touch of punk, rap and metal influence.

RHCP at the Stade de France

The Red Hot Chili Peppers made their mark with their wild concerts in small American clubs and festivals. They started to write more sophisticated lyrics accompanied by deep melodies at the end of the eighties. In a career spanning nearly 40 years, the Red Hot have recorded numerous albums and have many hits to their credit, including Give It Away, Under the Bridge, Scar Tissue, and Californication.

Opening acts include Anderson Paak & The Free Nationals and Thundercat

Tickets for the Stade de France concert are on sale since October 15, 2021 in the usual networks.