In Le Bourget, near Paris, in Air and space Museum you can visit the Cocarde Hall which exhibit French military aviation. This page provides an overview of the prototypes on display in the Prototype Hall.

Recognizable by their metallic livery, these aircrafts show the technological proliferation of the post-World War II and "jet" era: the Leduc 010 experimental aircraft taking off from a carrier plane, the Triton - France's first jet aircraft, and the Mirage III-V-01 - a prototype vertical takeoff and landing aircraft.

FYI : 12th February 1965 in Melun-Villaroche, the Dassault "Mirage III V.01" with vertical takeoff made its first hover. It was piloted by René Bigand. 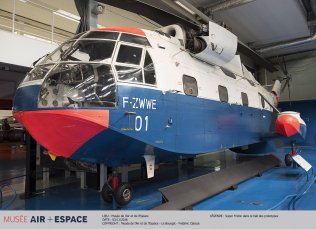 The Super Frelon 01 F-ZWWE was completed in "Air Force" version, with a seaplane hull allowing a safe landing but without floats. It made its first flight at Marignane on 7th December 1962. The aircraft was prepared, refined and lightened to break records, any non-essential element was removed. On July 19th 1963, it won its first record on the basis of 3 km, which was increased to 341.23 km/h above the Istres base. A few days later, on July 23rd, 1963, it was the turn of the record on the basis of 15 to 25 km which passed to 350,47 km/h, it finished on the basis of 100 km in closed circuit - the record was beaten at 334,28 km/h at 1000 m altitude (Istres-Arles-St Maries de la Mer).

It mades its entry into the field of wide-body helicopters. Restored to its original configuration with balloons, it took part in numerous operational tests. It joined the Air and Space Museum at Le Bourget on March 14, 1974.

The SO 6000 Triton is the first French jet plane. The first version was equipped with a 910 kg German JUMO 004 engine. The Triton 01 took off for the first time on November 11, 1946 but after 8 flights, it was replaced by another version. It was the No. 3 model equipped with a Rolls-Royce "Nène" 100 turbojet engine that took over.

The model on display was originally the Leduc 016 with 2 turbojet engines but due to the weakness of the engines, the aircraft was upgraded to standard 010 in 1952. The Leduc 010 was on April 21, 1949 the first aircraft in the world to fly with a thermoprop nozzle after being dropped over Blagnac with the help of a booster engine. It was the first flight of an airplane propelled only by ramjet. 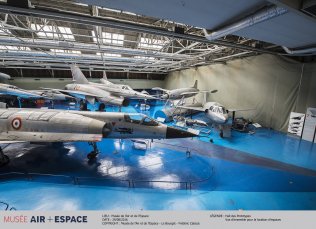 Other prototypes in aviation

On February 25, 1959 in Istres, the Nord 1500 "Griffon II" beat the international speed record over 100 kilometers in closed circuit with 1,643 km/h. It was equipped with an "Atar G" engine and a Stato Nord Aviation and was piloted by André Turcat.

On March 2, 1953, the SO-9000 Trident, a jet studied by Lucien Servanty for supersonic speeds, made its first flight at Melun-Villaroche. It is piloted by Jacques Guignard.

Depending on the altitude and temperature, one can determine the real speed at which the aircraft is moving. The higher the plane climbs in altitude or the hotter it is (conditions where the air is less dense), the higher this "real speed" will be.

Let's go to the world of rockets in the Hall of Space Conquest.