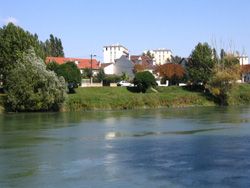 Gournay-sur-Marne offers the promises of beautiful promenades on the banks of the river that Gournaysians appreciate every day.

We can find Latin references from the tenth, eleventh and twelfth centuries “Gornaio castrum”, but the origin of the city name remains uncertain. It could come from the Gallic word meaning fishery. Situated on the banks of the River Marne, Gournay, has no need of a guide to show you the direction of the visit; the town caresses the river. Stop in front of the beautiful town hall, a former sixteenth century castle, built by lord Ancelin “milk-brother” of Louis XIV, it is classified as a French historical monument. A set of  four Mascarons frame the windows.

In summer 1997, the show “La belle de Marne” played by seventy actors and extras started a tradition in the town. It is likely that the show be renewed in another variant casting a plethora of dance, arts and famous people including : Paul and Henry de Kock - authors of popular novels; admire the paintings of Eugène Carrière before dancing a “musette waltz” in the “guinguettes” on the river banks.  Take time to visit the Eugène Carrière Museum - a Gournay painter at 3 rue Ernest-Pêcheur. Original paintings, prints and illustrations, personal belongings of the painter, an artistic library with about 1,200 books and art magazines, and various documentary resources on Eugènes Cariière and his era : old photographs, newspaper clippings and films.