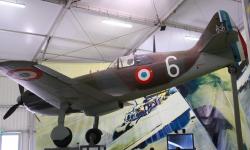 The Second World War exhibit hall was reopened to visitors in June 2015 after several months of refurbishment works. This exhibition hall is the result of a partnership with three institutions: the Air and Space museum, the Utah Beach D-Day museum and the Dewhurst Foundation. Admission to the exhibition hall and the World War II aircraft collection is free.

Even though air weapons were mostly developed during the First World War, progress in aviation made between the two world war conflicts brought a place of choice to warplanes. Bomber fighters could now dive bomb and had a place apart during ground war fighting. Among the hundreds of aircraft deployed, heavy bombers operated massively in the air raids. To ward off these strategic bombings, fighter aircrafts and defense canons were used. Defence against the planes was very efficient, which resulted in nighttime bombing operations.

You will also see in this space various fighter aircrafts which participated in the war 1939-1945, for example:

Board the legendary Dakota

Sit on the benches in the Dakota, the iconic American military aircraft from the Second World War, imagine yourself in the shoes of an allied paratrooper at the moment of landing. You will be in a similar and almost real situation of stress and noise to deepen your knowledge about the war.

See other heritage visits in english right there!