Visit the kingdom of the World War I Heroes 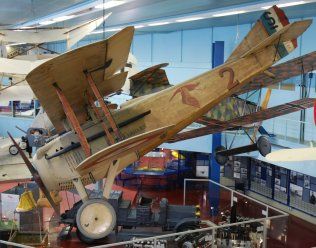 The Air and Space Museum Paris Le Bourget focuses great importance on the largest collection of aircrafts and vestiges used during both of the World wars. Collections of engines, medals, trophies, instruments, and equipment, models, artwork, spacesuits, uniforms, and much more are exhibited in the different halls and include 175 airplanes.

Visit the permanent war exhibition about “the ace-pilots of 1914 and 1918” in hall 2 located near the hall of eight columns. The Frenchman Georges Guynemer was an ace pilot in the First World War. A series of highly successful biplane fighter airships can be seen and appreciated for their highly significant technical progress and their help for the armies during the First World War. Several original airships from that period are genuine aircrafts from the 14/18 World War.

Biplane fighters’ aircrafts were developed in World War I to deny enemy aircraft the ability to gather information. Admire the Caudron G3, a single-engine biplane built by the French brothers René and Gaston Caudron to be widely used for exploring beyond the zone occupied by friendly forces to gain vital information about the enemy forces or to analyze the environment. Caudron G3 first flew at the end of 1913 and early 1914, was about 6.50 meters and exceeded 100 km/h. and was mainly used as a reconnaissance aircraft and for training.

Come and admire the renowned flying machine SPAD VII built in 1916 by the aeroplane production company known as Deperdussin. It was the first highly successful biplane-fighter-aircraft of a series produced by the above mentioned company called in French SPAD – Société Pour L’Aviation et ses Dérivés” during the First World war. The SPAD VII exhibited at the museum is nicknamed the “old Charles”.  The French legendary pilot Georges Guynemer was a world war national hero. He was an aviation member of the famous squadron of storks called in French “Escadrille des Cigognes”. He won fifty-three victories and it is written that Guynemer became the first allied pilot to shoot down a heavy German Bomber. He was a flying military aviator ace who shot down several enemy aircraft during aerial combat. Captain Georges Guynemer was confirmed killed in action by his squadron in September 1917, he was just 23 years old when his plane was shot down.

German plane abandoned on a battlefield

The permanent hall devoted to World War One includes some Junkers J, the world’s first practical all-metal aircraft. Built in the early World War I years when aircraft designers used wooden structure or fabric covered materials, the Junkers J1 was a revolutionary development in aircraft design, it was built and flown only 12 years after the Wright Brothers first flew the Biplane-Flyer I in December 1903. The Junkers J1, characteristic of all-metal fighter construction, still widely used for aircraft design at the outbreak of World War I, took off for the first time in September 17th 1917.

In comparison to its competitors Caudron G.3, a single-engine French biplane, widely used in World War I as a reconnaissance aircraft and trainer, the Junkers J1 is larger with a 9 meters’ wingspan and equipped with a Mercedes engine which could reach 220 km/h. The Junkers J exhibited in the lobby of the “1914-1918-Ace- Hall” at the Air and Space museum was abandoned on a battlefield by the Germans after the Armistice of November 1918.

The 1914-1918-Ace Hall exhibits various engine gear-sets, bomber aircraft as well as uniforms, engines and propellers, military insignia and drawings from that era. Get a view of the aeronautic balloons, the aerostats and lighter formula than aircraft, hot air balloons which were greatly use during the World War I as a surveillance platform. They are lighter than air technology and had been part of the military invention. They provided the first available method of elevation used over battlefields to view and obtain the proverbial “birds-eye view”. Discover in this World War I hall  particular useful information of accurate battlefield maps, the rudimentary crafts which helped to stop most of the battlefields failure to localize the enemy.

Small film-sequences of some of the Ace-heroes are also available to the public in the makeshift camp of Adrian, a reconstructed army barracks in the lobby that can be disassembled.

You're fond of heritage visits? Look at all the english guided ones right there!