Neuilly-Plaisance, is a new town that has managed to preserve a certain quality of life on the banks of the Marne to the delight of its inhabitants. 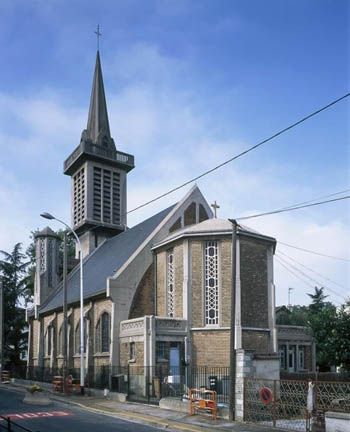 Neuilly comes from "nobilia-cum" the derivative which designates the clearing carried out on the banks of River Marne, and Plaisance, in memory of the castle of the same name. Neuilly-Plaisance was established on April 13th, 1892 by decree of President Sadi Carnot. The discovery of a polished stone and bone fragments was proof that the territory had been occupied more than 5, 000  years ago. Over the years, the town had been the theater of events, sometimes tragic, such as the Battle of the Plateau d'Avron during the war of 1870. This same place housed plaster industries, which were very active until 1945 and then died out in 1970. These gypsum quarries represented almost 600, 000 m3 of tunnels as high as 13 metres.

Many well-known people contributed to the history of the town. The best-known of them is undoubtedly the Abbot Henri Groues who took the name Abbot Pierre during the Resistance. It was in Neuilly-Plaisance where he settled in 1947 and where he founded two years later, Emmaüs. André Devambez, a post-Impressionist painter in the tradition of the Nabis, lived in Neully-Plaisance as did the the tenor Georges Thill. Other celebrities, Marcel Thil,  world  middleweight boxing champion  in 1932 and Claude Saluden, former military world boxing champion in 1958 and 1959. The athlete Patricia Girard, who won the bronze medal in the 100 meters at the Atlanta Olympics in 1996.

La Voie Lamarque, the former railway connecting the gypsum quarries from the  plateau Avron to the Marne, was refined resulting in a candelabra lit walkway. There is a walking promenade of about ten thousand square meters of green public spaces  all along the Marne banks. These three green axes are connected to each other by a track – the  Grande Randonnée, GR 14 A. (hiking trails)

The old village hall of the Plateau d'Avron was rehabilitated. The Municipal cinema La Fauvette now stands there. At the Guy de Maupassant library, you will find a brand new cyber café. Indoor and outdoor tennis courts, stadiums, swimming pools and gyms as well as an athletic running track welcome athletes. In June and September,  go on a treasure hunting expedition during the traditional flea markets.

Its location, close to the A3, A4, A104 and the RER line A station, is a major asset for economic development : the industrial zone les Renouillières, the artisanal zone Fontaine du Vaisseau and the ZAC (urban development zone) on the banks of the Marne

In Neuilly-Plaisance you can also see the church Notre-Dame de l'Assomption, and a century old oak tree planted in front of the Church.

In addition to the sites and places of interest, do not miss the company visits and guided walks organized throughout the year near Neuilly Plaisance. You can also consult our list of accommodation in Neuilly Plaisance or nearby.