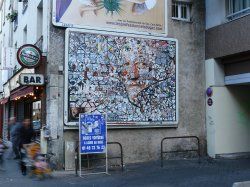 Thom Thom, nicknamed "The cutter artist", founded with Jean Faucheur the association Le M.U.R in 2003. Settled in Paris after the year 2000, he developed his own artistic style and typography through research of “Nouveaux Réalistes” such as the “Situationnists” who inspired him.

It is more than 10 years now hat Thom Thom has worked in situ on billboards. He cuts, sculpts, carves the posters. One layer, two layers, ten layers: all his work concentrates on the thickness of it. He is even more ephemeral than his counterparts of street art who are subject to constantly renewed advertising contracts. A genuine archaeologist of posters, Thom Thom has invented a new language.