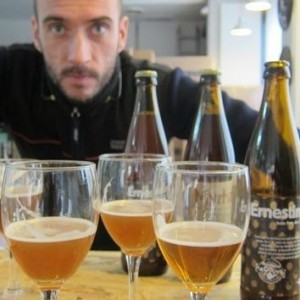 In the past, there were a lot of little breweries but they  disappeared because of the industrial revolution in the 19th century. They were replaced by big industries. In consequence, the taste and quality had decreased.

For the last few years, we can see a return of local production in general and for beer also. This brewery in Paris La Goutte d’Or was founded two years ago. This brewer uses artisanal methods, such as brewing by hand. He works on a human scale, and in particular in search of taste of malts and hops.

During this visit, you will see the different stages of brewing. The first is like a big infusion: a mix of malt previously crushed and warm water. Then, the must that we retrieved is boiled. It’s during the boiling that hops are added which give the bitterness and flavor. A brewer is like an alchemist, he can test different quantities and mixtures. For the last stage, yeast is added to the fermentation. We have to wait for 3-6 weeks to drink, depending on the beer.

This visit is also a tasting visit! The brewer offers several kinds of beers: lager beer, wheat beer, Indian Pale Ale (IPA), red beer… to which he added flavors  such as spices in order to recall the identity of this popular neighborhood. Each beer bears the name of a street of the neighborhood: Chateau-Rouge, Myrrha, Ernestine, Charbonnière… IPA,is a high fermentation beer, in the tradition of Anglo-Saxon breweries, that contains more hops, so more flavor and bitterness and also more alcohol!