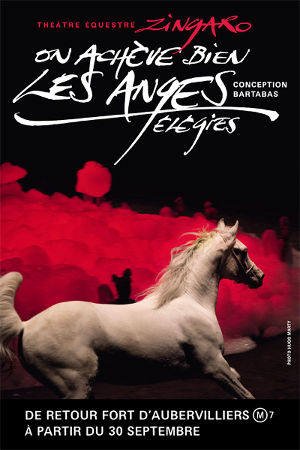 After his artistic pieces: Cabaret Opéra Equestre, Chimère, Eclipse, Triptyk, Loungta, Battuta and Darshan, Bartabas is back with his latest creation, On achève bien les anges at the Zingaro equestrian theater. After a series of shows and performances during his summer festival tours, he is coming back in the autumn to his theater at Paris Fort d'Aubervilliers.

It has been a long time since Bartabas performed on stage. The rider will be back on horseback once again on this occasion to offer us superb representations of his equestrian scenes : dark, funny, moving. He portrays flayed figures, fallen angles or just a drunkard, magnificently accompanied to the music of Tom Waits.

The different performances alternate between dressage, horses roaming freely on his artistic stage, musical interludes, funny and moving, with a troop of clowns, angel acrobatics, and of course –the show itself – the beauty of the horses...

This Bartabas creation performs at Zingaro Equestrian theater and will be held on Tuesdays, Wednesdays, Fridays and Saturdays at 8:00 p.m. and at 5:30 on Sundays.

Attention please: not recommended for children under 7 years old.

Parisian Guinguette cruise on the Seine river
Unaccompanied tour with a guidebook and stone sculpture workshop at the Saint-Denis basilica
Cruise from the Saint-Martin canal to the Seine : best of both worlds
Chinese Belleville
Seine-Saint-Denis Tourisme
140, avenue Jean Lolive
93695 Pantin Cedex
Tél. 01 49 15 98 98