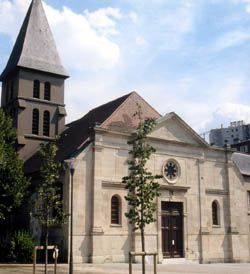 The bishop of Rouen Saint-Ouen, treasurer of Dagobert, friend and biographer of Saint Eloi, died in 683 in the royal villa, Clippiacum, the house of Dagobert. Before being transported and buried in Rouen, the corpse of Saint Ouen was exposed at Clippiacum. The place rapidly became a place of pilgrimage because of the holy relic (the finger of Saint Ouen). With the influx of pilgrims, a village formed and later became Saint-Ouen.

An architectural statement from Roman to gothic

We know that in 832 a chapel was located on the same place where the body of Saint Ouen was exposed, and the chapel where the holy relic was kept. The Christian community expanded and in the twelfth century, worshippers built a church which responded to their cultural needs. The choir was first constructed in the years 1140-1160, then, two bays (the fourth and the fifth bays of the current building) and the base for the future bell tower was laid. Despite the existence of the first gothic building in the region (notably the Basilica cathedral of Saint-Denis and the church Saint-Lucien at La Courneuve), the rib-vaults were proof of a Roman architecture as well as the acanthus sculpted capitals. The keystone marked with the coat of arms of Condé was added in the sixteenth century.

The first three bays of the nave of the current building show the evolution of architecture with pointed arches on the naves and aisles, double arches and ribbed vaults supported on massive columns with octagonal capitals dating from the late sixteenth century. The façade was completed under Henri IV. The portal was destroyed in 1567 during the religious wars and was rebuilt in the seventeenth century.

Traces of the contemporary period

The church of Saint-Ouen-le-Vieux shelters an organ built in the eighteenth century. A plant cover ornamentation was sculpted along the wooden part. After its restoration, the organ was placed at the back on the left-hand side . The marquis of Planty, mayor of Saint-Ouen in the middle of the nineteenth century, ordered various important restorations. An engraved slab, dating from 1842, preserves this memory. Two stone bas-reliefs from the nineteenth century belonged to two altars since disappeared. On the first stone figures the Annunciation and the second a representation of Joseph on his deathbed surrounded by a Christ blessing him and a Virgin Mary in prayer, the whole situated in an interior made up of arcades and ancient draperies.

In 1840, a small sculpted group, from the former portal, was found. It represented an angel holding a chalice and the holy bread for the Communion of a queen inscribed in a window frame. It is now placed over the entranceway. On the eve of the Second World War, three Gothic statues from the old portal were stolen. In 1976, the city council decided on a major restoration campaign. Directed by the architects Brasilier, Thyrault and Plankaert, restoration was completed on 14th December 1980 by a ceremony bringing together the mayor Paulette Fost, the priest, Philippe Denis, and population of Saint Ouen.