Visits, attractions and fun things to do in Saint-Ouen 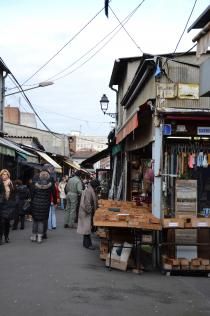 Between la Seine and la Plaine-Saint-Denis, Saint-Ouen adds to the pleasure of a more classical tourism, industrial heritage visits are becoming more and more popular with the public. The Flea market’s reputation is now firmly established…

The origin of the name of the city comes from St Ouen, the Bishop of Rouen, who died in the royal villa Clippiacum where Dagobert once lived. The first rag-and-bone men and rag-pickers settled their stands at the footsteps of fortifications before the war of 1914. Every Sunday morning anything and everything was sold here. Hence, the market known as the Flea market was born. Galleries and warehouses developed according to space availability on each side of Rue de Rosiers: Paul Bert, Serpette, Malassis, Biron, Vernaison, Dauphine to name a few Clignancourt markets. The different “bistrots” (bars) liven up the place with typical old Parisian songs adding to the charm of the market. Don’t forget to make a stop at the Café Django Reinhardt.

Walking tour of the Saint-Ouen city

A not to be missed visit when in Paris: head off for a self-guided walking tour; the best way to get to know Saint-Ouen. This popular activity for visitors and locals offers many typical surprises of funky craft stores, artsy boutiques and sidewalk cafés which will give visitors a good snapshot of French art de vivre hidden around every corner of the city and the historical flea market Paris Saint-Ouen neighborhood.

Start your stroll by following the road towards Plaine Saint-Denis, until you reach the venue cinema “Espace 1789” located at the corner of Alexander-Bachelet road offering movie fans permanent exhibitions, conferences, shows and concerts. Complete the tour via avenue Gabriel-Péri to visit the Notre Dame Du Rosaire church, a monument of very great interest built in the Romano style which was part of the artistic movement of the Middles Ages. Take a look at the town hall built in 1866 -1868 by the architect Lequeux at Saint-Ouen-Republique square. Wall painting frescos and the council chamber were done by Gervais in 1917. Wander across from the town hall towards a curved-style renovation of the former Bank of France building by the architect Stakier; it now accommodates the social and administrative department of the town. Bypassing the city hall, take a look at the college Jean Jaurés built by Mancel in 1933-1934. It represents a typical between-two-wars architecture of red bricks as base materials.

At number 9, rue Diderot, the Auguste-Delaune swimming pool known for its famous summer basin built in the middle of the stands and the large circular column. On one of the walls inside the swimming pool features a low-relief of the sculptor Bancel. From Place de la Republique, take the Jean Jaurés Boulevard.

Stop at N° 74 to see the brick wall facades (with the exception of the window lintels) as well as the cornice lining the fifth floor surmounted by composite pediments. Turn left onto N° 40 Rue du Landy, look at the XIX century house built in the style of Italian Villas characterized by moldings and ornamental sculptures reflected in the frieze above the cornices. Stop off at N° 27 rue Soubise, to view the twin terraced houses built by a wealthy landowner in 1907 for his son and daughter.

Return by rue Landy to Place D’Armes. Turn right onto rue Saint Denis and turn immediately left onto Rue des Chateaux. N°3 rue Fernand-Hainaut  houses CESTI, an engineering school where the former Noble House “Noble Maison” was located founded by Jean Le Bon in 1351. Jacques Necker, Louis XVI’s General Director of Finance bought a part of the estate in 1770 for his Country home. His daughter Germaine (1766-1817), who became the famous Baroness de Staël, lived in this house in Saint-Ouen inherited from her father. For the last part of your walking tour of the area, visit the Saint-Ouen-Le-Vieux church on rue du Planty.

Another walking tour along La Seine when visiting Saint-Ouen at the footsteps of Montmartre Basilica: wander along La Seine and pass in front of the Pont de Saint-Ouen. On your way, admire the aerial architecture of the Palais des sports building at l’Ile des Vannes. Crossing Quai des Seine, go into the municipal greenhouse gardens. A botanical pathway trail takes you to the waterfall and a long basin fitted out into three levels. The ground level of the old city wall foundation marks out the path which leads to the park Abel-Mézières , to the Grand Parc and the Saint-Ouen Castle.

The original castle-building, dating from the XVII century, now accommodates the city museum where documents of local history can be viewed, as well as a large collection of artworks: contemporary art works by Bourdelle, Germaine Richier, Gromaire, Fernand Léger, Pignon, Jean-Lurçat ou Picart le Doux. Sacré-Cœur church located at 104 rue Dr Bauer reveals marvelous interior decoration design by the artists Boris Metstcherski and Maurice Denis (1870-1943), one of the founders of the “Atelier d’An Sacré” workshop in 1913. The famous Red Star football Bauer stadium is also worth a visit. Citroen factory has been situated on rue Captain Glamer since 1919. The  car manufacturer bought all the buildings constructed in 1848 from the industrialist and inventor Marie Joseph Farcot, who had established a steam-engine factory there. Go to rue Godillot, where the old train station can be found and where it is still possible to stroll along the old railway tracks.

If you're still motivated for a walk, check the hiking path of Saint Ouen that goes through all the major places of the city.

Many tours are held throughout the year to visit Saint-Ouen: do not miss the flea market visit or heritage tours. Contact the tourist office or sign up for industrial-visits, or urban walking tours near the capital.