A fuller understanding of past and present of the history of  Paris Saint Ouen Flea market.

At night, rag pickers, petty thieves and rag-and-bone-men roamed through the Capital to collect their haul. Chased out of Paris at the end of the nineteenth century by the municipality because of sanitary conditions, the rag-and bone-men set up their makeshift camps and shacks between the fortifications and first houses in the village of Saint-Ouen. Despite the settlement fee imposed since 1891 on all traders and merchants who unpacked their odds and ends and scrap iron every Sunday on the pavement avenue Michelet, little by little Guinguettes appeared, the various stalls attracted strollers who came here on a Sunday for a sip of tax-free white wine. Between 1905 and 1914, picturesque press reports, evoked "A flea market", which contributed to its expansion and more merchants. A new trend was launched; the Flea Market was born…

After the First World War, the Market became so common to so many people that "businessmen" had the idea to buy some land, to build streets and bring water and electricity to be able to begin cost-friendly stand rentals. Between 1920 and 1991, “durable” markets were set up.

In the aftermath of the Great War (1920), the first markets were created. Due to the immediate success of the flea market, businessmen decided to set up there and made arrangements to build streets to link the area, to bring the water pipes for running water and electricity. Thus, generate all the necessary elements to traders and customers.

Romain Vernaison was the first to install prefabricated stalls and to lease out to tackle price gouging by dealers and rag pickers: Vernaison Market formed part of the first Flea markets opened in 1920. In 1925, as a result of multiple pressure and eviction petitions for dealers installed in the "zone", an association of antiquarians was set up and they settled in champs des Rosiers giving rise to a third market here : Biron Market which is recognized as the place where you can find quality antique furniture, gilded wood, glassware… The expansion of the Flea market continued with the opening of the Market Jules Valles in 1938. This space remains faithful to the original spirit of the Flea Market; Jules Valles Market is the place to discover unusual objects and for bargain hunting. Malik Market comes from the name of an Albanian prince who set up his vegetable market opposite an old restaurant Le Picolo and the space for odds and ends.

Since then, the place has become fashionable; people enjoy the atmosphere of the Flea market known for its cafes, bistros, restaurants and fun activities (Guinguettes, barrels games…). Locals businesses were bought by antiquarians, dealers or craftsmen who settled around these markets. Between 1947 until the 90s, new markets were opened here, each with its own specialty: furniture from the eighteenth, nineteenth, and twentieth century, clothes, old books… 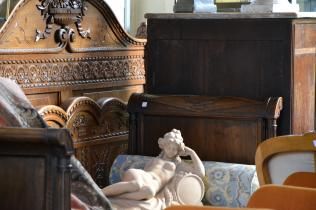 At the end of the year 1990, an urban development project for this neighbourhood was decided. In 2001, the classification Zone of Protection of Architectural Urban and landscape heritage was obtained for the entire Flea market thanks to its friendly and unique atmosphere.

It is today one of the first flea markets in the world, this flea market delights bargain hunters and is highly appreciated by intrepid lovers of original outings. With more than 2,500 traders, the Paris Saint-Ouen flea market represent on its own about 11km of window shopping combining a dozen or so markets.

It is also one of the first cultural and tourist destinations in Paris Ile-de-France with several visitors each year to the all the markets located in the neighborhood of the de St-Ouen / Clignancourt flea market and notably the many alleyways around. Visitors are welcome on Saturdays, Sundays and Mondays all year long (from 10 am.- 6 pm. according to the season) and professionals on Friday.

A large variety of objects of all styles, from different periods and countries are available to satisfy all, from the casual visitor to the lover of original outings. 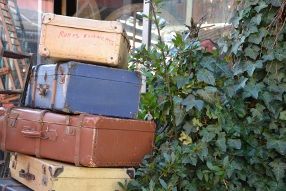