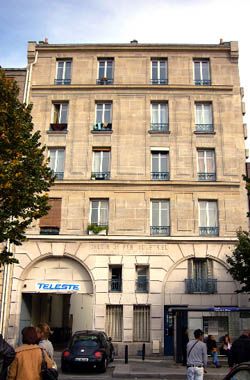 In parallel to the waterways, railway traffic has given a strong impulse to the industrialisation of Plaine Saint-Denis. Even though, for a long time, major railway companies were not interested in the Paris suburbs and preferred national public transportation, two entrepreneurs had a great idea that was to be a determining factor for industrialization of the region.

A stone masonry company « Riffaud et Civet », left Paris and set up over a 40 000 square meters surface in Plaine-Saint-Denis. The two industrialists bought a beautiful house called “the Plaine’s castle” located at 126 Pars Avenue (now named president Wilson Avenue). They constructed two buildings to be used as study offices, commercial services and workers housing. Stables that could shelter 50 horses were planned, but the two business men had a better idea. in 1886, to facilitate stones transportation they thought of linking their stone masonry worksite to the Northern railway.

The construction of this private line required important resources. So, Riffaud and Civet contacted other industrialists located on that potential line to work together. Some of them agreed immediately, such as Saint-Gobain, Tancrèdes brothers’ factory and the “Deux-Mondes” soap manufacture. Once their stone masonry worksite connected to the Northern railway, to the goods station “Plaine Saint-Denis” and the internal network of General Stores – it then linked to the Paris ring road and to Gare de l’Est, Paris station. A port was created on the Canal Saint-Denis, allowing for a connection between waterway and railway. The industrial railway network was born! 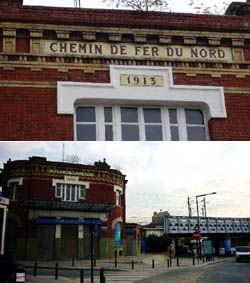 A true web of railroad switch systems was taking place. The railway that connected the firms had been installed. This organisation was especially interesting as it reduced raw materials transportation costs and manufactured products. But, furthermore, it created a demand of new material. In fact, rails, beams and girders, locomotives and craftwork pieces were essential to its functioning, creating a new industrialization sector. Several companies moved in to respond to those new needs. It was the case for the “Compagnie Auxiliaire des Chemins de Fer » that set up in Saint-Ouen in 1880 to construct train compartments. The Corpet-Louvet company, created in 1912 in La Courneuve constructed railway materials; the Westinghouse firm, railway brakes factory in Sevran; Worthington, in Le Bourget, specialised in railway couplings; or the Jeumont-Schneider firm that produced railway systems, track changing or crossings in Plaine-Saint-Denis from 1919.

The industrial railway society that began with three “connected” stations, served twenty in 1890. In the 30’s, the industrial railway company was at its most important  with eighty five firms and warehouses linked, transporting up to 600 000 tons of freight a year. At the dawn of WW2, this system served 140 hectares on  Plaine St Denis.

Remains of the industrial railway society

In the 50’s, connection with the General Stores were closed because those stores used at that time mainly the roadway, then the Haie-Coq station stopped its traffic. With the beginning of deindustrialization of the site, the industrial railway society activity decreased suddenly from 1970. The last train ran on the network the 15th of December 1993, day that the steel industry firm building Nozal closed.

The industrial railway society building, added  3 floors in 1906, still stands at 124 Avenue Président Wilson. Despite a few transformations of the facade, the two vaults, one allowing for the passage of the locomotives and wagons, the other,  the evacuation of the trailers pulled by horses that made deliveries, are still here. In the entrance garden of the Magasins Généraux (50 avenue du Président Wilson), an electric locotractor AEG with accumulators and three axletrees is exhibited. Constructed in 1930, it is one of the last seven locotractors that ran in the Plaine. It is part of to a central cabin type, called “boîte à sel".