In the second half of the nineteenth century, factories were not the only ones to invade the north east of Paris. With the growth of urbanization and industrialization, supply capacity had to increase and thus a new function appeared : storage. From simple timber depots (at Bagnolet) succeeded warehouses such as – Les Magasins Généraux – the General Stores created in Aubervilliers in 1866. Their architectural quality promoted and preserved their existence.

The north east suburb of Paris is an ideal location for storage of any kind of goods. The important communication network and the vast space available, much cheaper than in Paris, are undeniable advantages. Thus, the SITA (Waste management Company) set up in several sites where it built large hangars used as garage trucks for garbage collection. In 1897, two of the garages in metal frame were built in Saint Ouen and Romainville. Then, in 1924, in Pantin, a new concrete building housed the SITA company trucks.

On the site of Plaine Saint Denis, the company Nozal created a warehouse connected to the industrial railway network. They definitively ceased activity with the closure of Nozalin in 1993. A large hall covered with concrete oval-shaped sheds still remains today. It was at the end of the nineteenth century that these sheds first appeared with saw-tooth roofs designed for farms and used in series of three and which became a genuine invention of industrialization architecture. The sheds have become factory symbols.

Many repair workshops or railway equipment repair shops were also created for the maintenance of the industrial railway. The storage buildings in Plaine Saint Denis opened in 1874, were heavily damaged during World War II, but were rebuilt and worked up to 1990. Their large concrete vaults form a remarkable ensemble.

A short history of the warehouse-docks

The idea of the warehouse docks was the brainchild of the British. A first dock was built in 1710, at Mersey in Liverpool! But the real motivation took place in London which was then in first place regarding the world’s largest import port. It was a single place for landing and shipment of goods and  storage under the management of a single enterprise. From 1801 (construction of West India Docks) to 1806 (with the Victoria Docks), five establishments of this type were created.

From the first third of the nineteenth century, British secondary ports took the initiative to connect their establishments to railway tracks, which was not done  by London until 1856.

The Paris warehouse docks represented an intermediate step between the first British experience and the outcomes of that kind on the docks in Marseille. Two Parisian storage establishments were built on the canal in the middle of the nineteenth century: the Pont de Crimée warehouses between 1845 and 1853 close to Bassin de la Villette, and the Pont de Flandre warehouse-docks along the banks of Canal Saint Denis built in 1854. Following the development of Parisian warehouses and in the logic of continuity to the outskirts, the first warehouses were built in Aubervilliers.

Creation and recreation of the Magasins Généraux warehouses in Paris 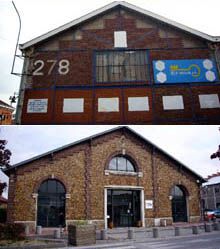 Georges Tom Hainguerlot, a Parisian entrepreneur, possessed some warehouses located at Pont de Flandres in the nineteenth district of Paris. He bought a piece of land located on the banks of the canal in Aubervilliers in 1866. In 1874, the site was taken over by the Société Anonyme des Entrepôts et Magasins Généraux d’Aubervilliers et Saint-Denis created for this purpose one year before. It was dissolved a year after that and was completely absorbed by the main Company "Compagnie des Entrepôts et Magasins Généraux" in 1879.

Since then, the company continued to expand, buying the plots of land in the vicinity and demolishing all the buildings on those lands, and continued to proceed like this till the years 1950. To replace them, the EMGP built their own storage buildings. The sites eventually occupied all the space extending from Porte de La Villette to Porte de La Chapelle on the edge of Paris. It was connected to the railway network to the north and to the east and later to the industrial railway system, and finally to Canal Saint Denis by the business activity area called “de l’entrepôt”. Bulk storage concerns non-perishable food items such as cereals, sugars, alcohols and oils but also wood and coal.

The Magasins Généraux, as is so often the case, borrowed their architecture from market halls whose simplicity and size answered  the economic needs  and surface area. The hall is equipped with a double roof, also called open roof, allowing ventilation and direct light, openings in the wall being limited to the gable walls. Sometimes, storage buildings such as those of Westinghouse in Sevran, are covered by huge windows providing good air circulation and light.

A long time disused, after industrialization abandoned the site, the enclave of Entrepôts et Magasins Généraux de Paris expanded rapidly with the construction of "Millénaire", a shopping center, and Rosa Parks, a new district in Paris. In almost ten years, about three hundred companies and twelve thousand employees have settled around this well habilitated heritage. The buildings are now dedicated to new companies and television studios.

Simultaneously, new building were created, such as the "270", a flagship-building designed by the architects Xavier Gonzales and Olivier Brenac.

The seven floors of this "intelligent building" and its brick decorated façade and bay-windows playing with colors, was inaugurated in 2005. It is one of the first French office buildings to be awarded the label "démarche HQE" (High Quality Environmental Standard) and is a model in environmental matters. Some office buildings, vegetated, offer a truly magnificent effect.