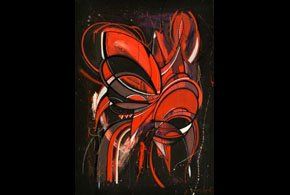 Roman Froquet pursued and revealed his artistic talent in the group “collectif 9e concept” that he joined in 2000. Influenced by African and South American tribal art, his creations are also inspired by great artists such as Picasso and Basquiat.

Roman Froquet is also an exceptional colorist. He knows how to introduce color into his artworks in a vibrant and impressive way. Since 2012, his work has revealed the symbol of a tree, which he declines in arabesque and abstract wisps and swirls in the heart of the city. A symbol of humanity and vitality, the tree is also a symbol of deep-rootedness and temporality. He illustrates the human condition through his brush swipes that intertwine together.