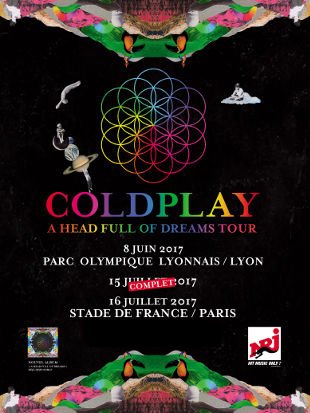 The British alternative rock band, Coldplay, has confirmed new dates for their next summer 2017 concert at Stade de France in Saint-Denis in France. Coldplay will return to this mythical Stadium on 15th, 16th and 18th July 2017, where they already performed in September 2012.

The group is composed of Chris Martin (vocalist, guitarist, and pianist), Jonny Buckland (guitarist), Guy Berryman (bassist) and Will Champion (drummer). Coldplay achieved fame very rapidly in the years 2000 with songs that became very popular dance floor tunes such as Yellow, Trouble, The Scientist, In My Place, Clocks, Speed of Sound, Violet Hill and more recently Viva la Vida. The concert will be the opportunity to hear all these songs again and to discover their new album.

Consult the list of hotels near the Stadium at Saint-Denis, hotels in Paris near public transport.