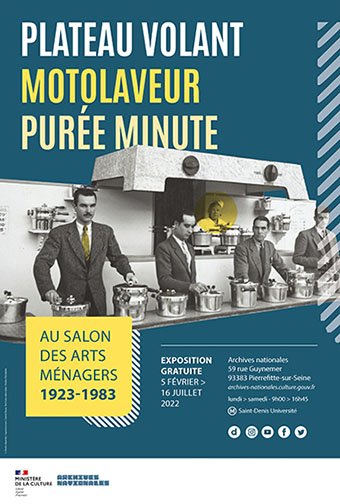 The National Archives in Pierrefitte is putting on a free exhibition on the Household Arts Show.

The exhibition at the National Archives

The exhibition focuses on the making of the Salon des Arts Ménagers and on the resulting visual culture.

The Household Arts exhibition is organized in three parts:

The documents on display come from the collection of the general commission of the "Salon des arts ménagers", donated to the Archives Nationales by the CNRS in 1985. They are mainly black and white photographs - but also in color! - and posters.

Free exhibition, open from Monday to Saturday, from 9 am to 4:15 pm.

An exhibition catalogue accompanied by an essay by Martine Segalen and various lines of thought that complement those explored in the exhibition was produced for the occasion by CNRS editions.

History of the Household Art Show

Organized for the first time in 1923, the Salon des arts ménagers (SAM) was created to present the latest in home equipment. Its last edition took place in 1983.

This annual show was very successful, especially in the 50's and 60's when the consumer society was booming. Families came to discover the innovations in household appliances, equipment and utensils for the home. The decline of the show began with the multiplication of stores throughout France.

The Salon des arts ménagers was first installed in a barrack on the Champ-de-Mars in Paris. Due to its growing success, it was moved to the Grand Palais in 1926 and then to the Centre des nouvelles industries et technologies (CNIT). Over the years, the show has evolved from a general public event to a trade show. The last show was held in 1983. It was replaced by the PROMODO domestic equipment show at the Villepinte exhibition center.

Getting there
Metro : Ligne 13, Saint-Denis - Université