On 21st May 1927, the Spirit of Saint Louis, Charles Lindbergh’s plane, landed at Le Bourget airport in front of two thousand enthusiastic people jostling their way to the edge of the runway to see him. He had just crossed the Atlantic Ocean in thirty three hours and thirty minutes.

Le Bourget had been the first civil airport since 1919, but was gradually replaced, from 1961, by Orly airport and in 1977 by Roissy airport.

The first Parisian airport was built according to pavilion architecture 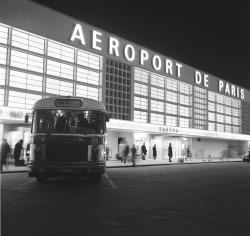 In 1914 at the beginning of the First World War, Désiré Lucca, lieutenant in French aviation, had orders to look for a site in the North of Paris to counter the German air force. He landed on 9th October 1914 on ground known as Aéropolis - a plot of land ideally located in the north of the capital between Dugny and Le Bourget. From that point on, everything needed for an aviation port structure was built within a month, (hangars, buildings…) an immediate requisition term was applied. This was the beginning for the future site of Le Bourget Airport!

In 1914, the French army requisitioned forty hectares of land in Dugny for the construction of an airport near Paris. The airport expanded rapidly in Dugny and Le Bourget and took the name of Le Bourget. It was from Le Bourget that the first recognition flight by Louis Bréguet took off which made it possible to organize the Battle of the Marne in September 1914. On 18th August 1918, the first official postal airline took off for Saint-Nazaire and, the following year, Le Bourget airport was officially inaugurated. During the twenties, all long distance flights increased, while during the following decade, tragedies and exploits followed each other. In 1921, the connection between Great Britain - Le Bourget to Croydon, was working six times a day, constituting a world record frequency. Three years after the exploit by Charles Lindbergh, Costes and Bellontes went from Paris to New-York on board the “Point d'interrogation”. In 1931, “le Brix and Mesmin”, took off from le Bourget, and perished in the Ural mountains while attempting to fly to Tokyo.

Terrisse and Rumpler, two engineers from Ponts et Chaussées were given the responsibility, along with the architect Henri Decaux, of installing commercial aviation along the route to Flandres, to the east of the land, in Dugny, on the location of the very first base. It was totally redesigned. In 1922, five large hangars 15 mètres high and more than 50 meters wide, completely made out of reinforced concrete, were built according to the plans made up by the architect Henri Lossier, and made available to big companies to shelter their planes. Each hangar could hold about six aircraft. Other installations were completed in 1924, were of a design unimaginable today, but quiet logical given the size of the airport at that time. It was composed of different pavilions with their own management facilities: customs, café-restaurant, meteorological services, and accommodation for the commander, etc. The main management building had a clock on its façade, like in a train station which included many organizational details. On the front of the building were the coat of arms of major European cities served by the airport: Brussels, Berlin, Moscow, London...

An "aerial port" with its typical nineteen-thirties architecture 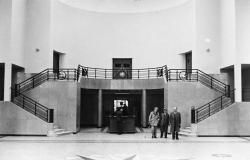 The ever-increasing influx of passengers and the increased amount of cargo in the early 1930s began to exceed the capacity of le Bourget. From 740, in 1919, the number of passengers reached, twenty year later, the incredible number of 45,000! International traffic never ceased to increase. Air France Company was created in 1933 and construction of a terminal of a real capacity and design with a more dignified look for the French capital became essential. A competition for its design and construction was launched in 1935 by the Ministry of Aviation. Georges Labro (winner of the Grand prix de Rome and specialized in the construction of post offices) got the job along with a new construction Company. They had to work quickly because the building had to be finished for the Universal Exhibition in 1937. Labro designed a rectilinear building two hundred and thirty three meters long, "Janus", where the part situated on the ground side was dedicated to technical procedures and aviation. Janus was located between the alignments of the former hangars, subsequently enlarged. The whole set offered a complex combining modernity, aesthetics and functionalism.

The courtyard of honor, (reception area) which welcomed passengers and visitors, presented, on the one side, a long and low white façade covered with marble limestone, punctuated by large glass bay windows. On the other side, Georges Labro used the marina metaphor to mean an "aerial port". The control tower, a large rotunda, seemed to move forward between the wings of the building, and figured the bow of a boat, while the row of seats located on the terraces, were built so that spectators could enjoy aerial performances, and symbolized a ship’s rails. The interior of the building was designed in a 1930s style. An aisle bordered by eight columns leading to the double flight staircase gave a strict and majestic appearance to it all. The large windows on the façade illuminated the aisles of the main hall, itself lit up by the glass tiles of the three arches in the roof. In the 1940s, three monumental statues by Armand Martial, recovered from a colonial exhibition, replaced the former old pediment flanked with the coat of arms which was judged too "railway-like" and outdated.

Le Bourget, one of the last three European terminals dating from the twenties 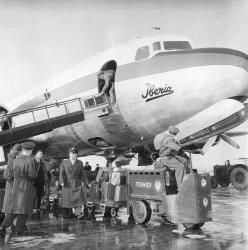 With the Second World War, le Bourget terminal became a strategic aviation hub. Even though it was at Le Bourget that the plane from Germany, which brought the French and English leaders, the signing parties of the Munich Agreement, landed, respite was short-lived. The airport was bombed and then occupied by the Luftwaffe who rapidly repainted the buildings for camouflage. More land was claimed and the first concrete runway was built. In turn, the Allies destroyed the Labro building and devastated the Lossier hangars. The Germans were chased out of Le Bourget in 1944 and Labro rebuilt the building almost identically. Two years later, in 1946, Le Bourget was attached to the public institution of “Aéroports de Paris” and its 550 hectares, spans today, over four towns and two departments:  Seine-Saint-Denis (Le Bourget and Dugny) and Val-d'Oise (Bonneuil-en-France and Gonesse).

When in 1953, its new control tower was inaugurated, the airport welcomed about 600,000 passengers. Orly and then Roissy brought about its downfall. It became a "small" airport, but le Bourget continues to live by and for aviation. Le Bourget is one of three airports from the twenties to survive - Speke in Liverpool and Tempelhof in Berlin. It represents a unique architectural heritage with parts of it protected since 1994. The terminal building is listed in historical heritage and shelters the Air and Space Museum. However, the Lossier hangars and the few remaining pavilions dating from the first era are today disused and are unprotected.

From Le Bourget airport to the Air and Space Museum 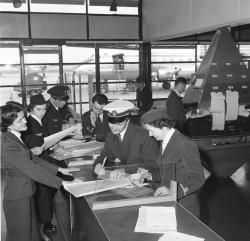 The vocation of le Bourget airport began to develop, from 1953, by hosting the famous international air and space exhibition which was held every second year. And afterwards the Air and Space was set up. From 1918, while aviation was still at its early stage, an aviation conservatory was planned. The first pieces collected were exhibited in the Chalais-Meudon hangar in 1921. In 1933, the new Air Ministry had planned to set up the museum in Paris, but had to give up because of the lack of space. The opening of Roissy airport, in 1973, freed traffic in the north which had up to then been primarily in le Bourget.

The infrastructure of the latter, which was now freer, provided the golden opportunity and the ideal place to establish the museum project. On 27th May 1975, the first exhibition hall, dedicated to the Second World War, was inaugurated. Followed by the inauguration of three more halls showcasing a chronological collection covering the first two major periods: from 1919 to 1939 and from 1945 to the present day.

Then hall E opened in 1982, and hall F the following year. In 1986, the oldest pieces were brought back from Meudon and installed in the Georges Labro building. 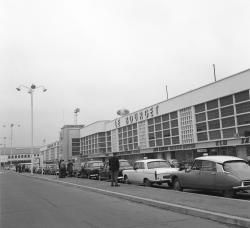 The Lossier hangars were used for maintenance of Air France aircraft (until 2015) and the labro hangar was converted into an aviation restoration workshop. The tarmac in le Bourget provides the perfect space to present huge pieces such as a Bœing 747 or Concorde. Since its inauguration, the Air and Space Museum in le Bourget has been redesigned many times and  exhibitions modernized, but it remains today, one of the largest in the world. Many events in the Museum are proposed to the public all year long.

It is also possible to visit the maintenance and restoration workshops in the Air and Space Museum. Take a look at the program on industrial visits organized by the Seine-Saint-Denis Departmental Tourism Board.