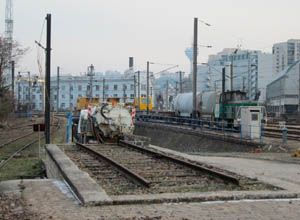 The "quai aux bestiaux" in Pantin, France, is part of an industrial and railway strategy covering more than 19 hectares known as "Pantin-Local". From 1862 this developed area was mainly used for goods traffic. It was the "avant-gare parisienne" (the station before Paris) for the railway company "chemins de fer de l’est" or East company, which managed freight and maintenance and was the workshop for railway rolling stock. Up to the first World War, the site had been progressively developed. In 1863, a first cattle station platform was built alongside the street beside the loading dock. It allowed for easier loading and offloading of cattle for the Sceaux and Poissy markets.

From 1867, it proved useful as a strategic point for the market and central slaughterhouses in la Villette, which was nearby. Towards 1890, a new platform was built, accessible from the streets Denis Papin and Cartier Bresson. More modern (it was easier to clean and had a disinfection system), it was linked directly to the "wider Paris belt" and allowed for easier transport of sheep and cattle from all over France. Most of the traffic at that time concerned herd transport. 393 metres in length, this platform was elevated (5 metres above street level on Rue Cartier Bresson) and serviced by three railway tracks heading East. Trains could therefore pull up alongside the platform and unload without having to manoeuver the carriages. A kind of paved "side street" 12m long, the platform was at ground level of the cattle carriages, which made for easy removal of the herds.

During the First World War this area was also used as a military zone. During the Second World War all economic activity slowed down. The 18th April and the 13th May 1944, it served as departure point for major convoys of women (around 500 each time) deported to Ravensbrück and those who, up until then, had been interned at the "fort de Romainville". The last convoy was the largest, due to the evacuation of the camp in Romainville and Fresnes prison, just a few hours before the liberation of Paris. The following days, a German armoured train stopped at the site to fight the FFI (French Resistance fighters), which resulted in the burning of the "Grand Moulins". A monument consisting of a section of rail and a plaque commemorating the last convoy was erected on the "quai aux bestiaux", where a commemorative ceremony takes place each year. Post war, reorganisation of the railway freight led to the installation of a logistics activity on the site. The site slowly became derelict or was rented out to private companies. The entire Pantin-Local area is subject to an urban restructuring project around an eco-neighbourhood development project.

A memorial consisting of a piece of the railway track and a commemorative plaque have been erected near the livestock platform.

A new neighbourhood will be built in this area. The remembrance of the livestock platform will be preserved.

Extract from a study on "enhancement and establishment of places of memory of internment and deportation in Seine-Seine-Denise, carried out by "Topographie de la mémoire" (Anne Bourgon, Hermine de Saint-Albin and Thomas Fontaine).