WWII memorials in the north-east of París

This list gathers the sites located in Seine-Saint Denis that played an important role in the policy of persecution and repression implemented by the Nazis with the help of the Régime de Vichy, between 1940 and 1944.

Places of deportation and incarceration in Seine-Saint-Denis

Its in the Cité de la Muette in Drancy that the majority of the 74,000 jews deported to the Polish concentration camps were confined between the spring of 1942 and the summer of 1944.

The train stations of Bourget and Bobigny participated in this so-called "final solution" collapse. Between March 1942 and August 1944, 74 trains left French territory from these stations and less than 5,000 deportees returned.

Two camps (Royallieu in Compiègne and Fort de Romainville in Les Lilas) and a prison in the Paris region (Fresnes) were the three most important places in France where the victims of the repression (mainly members of the Resistance) were detained. 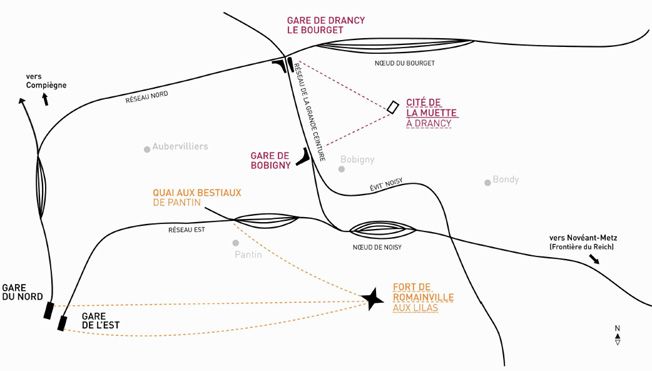 The Romainville Fort is the first camp established by the German authorities in the occupied zone of northern France, which was first an internment center for the administrative detention of immigrants opposed to the Nazis. From 1942, this place became a "hostage center" for people to be executed at Fort Mont-Valérien. From 1943, women were deported to the Ravensbruck camp from Fort Romainville. In spring and August 1944, some of them left France from the quai aux bestiaux de Pantin. The last deportation trains from the Paris region left this station on August 15, 1944.

The department of Seine-Saint Denis gathers important sites emblematic of the persecution and repression during the Second World War.

Deportation and internment camps in Île-de-france

The Compiègne-Royallieu camp, located in the Oise department (less than 100 km from Paris), became from 1941 onwards the main internment camp for Jewish and communist hostages (called "judéo-bolchéviques") and deportees of the resistance, all of them victims of a major repression. An important part of the resistance fighters left for the concentration camps from this place.

From 1943 onwards, the Fresnes prison mainly housed important Gestapo inmates. Nearly 65,000 people were deported from the northern and southern parts of France (excluding the Nord-Pas-de-Calais and Alsace-Moselle departments) and about 40% of them returned.

Many survivors landed at Bourget airport in 1945. Before Drancy became the internment camp for Jews in France in August 1941, this place functioned in connection with Fort Romainville, especially for the detention of civilian immigrants from the enemy parties, mainly British.

Since June 1940, the Swiss barracks of Saint-Denis served as an internment center for foreign civilian immigrants.

See the map of the different World War II memorial sites in Ile-de-France.

The Shoah Memorial in Drancy

Bourget airport, an aerodrome for the return of deportees