Tv-show conventions in Paris and its region 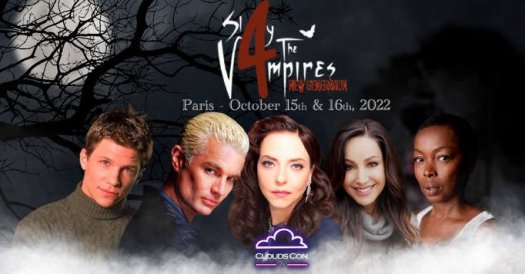 List of the Conventions of series which are held in Paris in thehotel Novotel Bagnolet and in the hotels near Paris Roissy CDG. These meetings with actors and actresses are paying. You have to register on the website of the organizer (Dream It, Cloud Con, People Convention, etc). Don't forget to book your hotel room.

Long May She Reign

Long May She Reign 3 was supposed to take place on March 11, 2023 - location: pending (Paris)
there is an uncertainty because Adelaide Kane is on another shooting and will not be available before 2024. Several hypotheses are under consideration: either maintain 2023, or postpone to 2024. To be continued
Guests: Ann Pirvu, Torrance Coombs
Organized by Dream It Conventions

Book your hotel in Paris or airport

The convention will be held in the Novotel Bagnolet hotel where you can book your room for the weekend. You can book your room in one of the airport hotels Roissy Charles de Gaulle if you come by plane. Think about hotels that are located near a RER B station (list of hotels) or in Paris near a train station (Gare Paris Nord, Gare de l'Est).

Other Conventions in Paris Roissy

Below is a non-exhaustive list of upcoming Conventions in Paris where the venues are not revealed.

> Wolfies in Paris, Teen Wolf will be held on February 18 and 19, 2023
(organized by Reunited Event). Are announced : Shelley Hennig on February 18th, Holland Roden on February 19th,... (waiting for the location)

> The Truth Or Dare Paris Convention - After saga - will be held on April 15 and 16, 2023. (organized by evolvedevents). The actors present: Samuel Larsen, Louise Lombard.

> From Wisteria Lane To Paris (Desperate Housewives series) will be held on Saturday, May 27, 2023 in Paris (location pending). Four guests will be announced. Organized by Union Association.

> Light into the Darkness : the ShadowHunters convention will take place in Paris on June 10 and 11, 2023. (organized by Clouds con). The announced actors are for the moment : Nicola Correia Damude, Emeraude Toubia and Alan Van Sprang. The location is to be confirmed #LITD

> Which tape is yours? The 13 reasons why convention will take place in Paris on June 24th and 25th 2023.
(organized by Evolved Events). The announced actors present : Amy Hargreavec and Timothy Granaderos, Christian Navarro, Devin Druid, Tyler Barnhardt. Location to be confirmed. #WTIY

>Grounders in Paris" convention scheduled for July 1 and 2, 2023 in Paris (The 100 series). Organized by . Expected actors: Christopher Larkin, Richard Harmon. Waiting for the place.

> Enter The Shadow World convention (Shadowhunters series) will be held in Paris (location pending) on July 8 and 9, 2023. It is organized by Dream It conventions. The announced actors : Alberto Rosende - Matthew Daddario - Kat Mcnamara

> Across The Other Woldr 2 Convention Paris (location not revealed) on September 23 and 24, 2023. (organized by Clouds con). Series: Destin Saga Winx. Actors: not revealed to date #ATOW2

Book your hotel in Paris