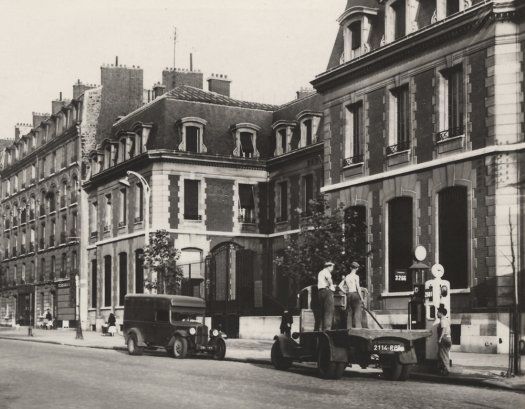 The architecture of financial institutions, whether it be on banks or on Saving banks (Caisses D’Epargne), is, at the same time, a testament to the economic roots of our country, that these hotel architectures bring to light, and that bring attention also to another crucial point in our culture: our urban environment. Discover the past – and the future – of the former building of the Banque de France in Pantin.

The buildings of the Banque de France (just like those of Caisses d'Épargne) play an essential role firstly for their location in an urban area and elsewhere, for the quality of the architecture. The Banque de France in Pantin is proof of this, but the same can be found in Saint-Ouen with the former building of the Banque de France located opposite the Town Hall - Hotel-de-Ville or the one in Saint-Denis, rue Catulienne. These buildings, valued as mansion houses, were part of the history of a tasteful architecture between 1880 and 1914, namely, extremely academic. One of the reasons was probably the composition of the boards of directors of these financial entities, recruited among local noble stock under the aegis of local authorities. Also, the architecture conveys an almost institutional image, lasting and trustworthy. The major deposit banks were created under the Second Empire with a national vocation to direct the bourgeois savings towards industry, thus the construction of a network of major branches which gained in reputation thanks to the symbolism of their architecture. This kind of architecture very often met with the needs of a particular historical style: eclecticism.

Major visual landmarks in our towns

The historically based eclecticism (a barbarian term but used in the jargon of art historians) is part of our daily life be it religious or civilian. We can come across this approach at any time in our environment, searching the origin of the history of France through its monuments. The most conclusive examples of this is found in religious architecture, as can be seen with the works of Viollet-le-Duc, notably the church Saint-Denis-de-L'Estrée, or the church Sainte-Famille, in Pré-Saint-Gervais of roman inspiration even though it was constructed in 1913, but also with the little house constructed under Napoléon III in Neuilly-Plaisance.

The building of the Banque de France, on avenue Jean-Lolive in Pantin, perfectly meets the criteria of eclecticism of the 19th century. It benefits from an 18th century construction, of a mansion house type, horseshoe-shaped, with a pastiche of a Henri IV style, recognizable due to its mix of bricks and corbelled stone blocks. These buildings, “sober” and classical, such as the buildings of the Banque de France in Pantin, Saint-Denis or Saint-Ouen, or, completely baroque, such as the buildings of the Félix Potin enterprise, have long been, with the town halls, major visual landmarks of our towns.

The Banque de France building is now a fashion school

Banque de France left this remarkable mansion house in 2010 to resettle at 140 avenue Jean Lolive. The former Banque de France building in Pantin remained in waiting for a new function until 2015 when it was decided to create a fashion school there scheduled to open in 2018. After Hermès and Chanel, ESMOD, a training school for fashion trades, created in Paris in 1841, is now settled in Pantin. Work began in November 2016 for about 13 months. When it opens, it will welcome from 400 to 500 students of 60 different nationalities.