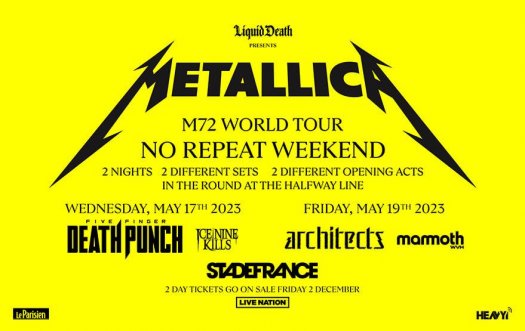 The metal band Metallica will be in concert at the Stade de France as part of the M72 tour. This passage at the Stade de France will not be a first for Lars Ulrich, James Hetfield, Kirk Hammett and Robert Trujillo. Metallica has indeed already performed in Saint-Denis in 2012 for the 20th anniversary of the Black Album and in 2019 for the WorldWired Tour. Come and vibrate on their single titles of Metallica as Nothing Else Matters, The Unforgiven or discover live tracks from their latest album 72 seasons.

For this M72 Metallica world tour the band will play two dates with two different sets in each city of this tour.

The No Repeat Weekend at the Stade de France will feature two different setlists and two different guest specials on a circular center stage.

The "2 day packs" will be on sale on Friday December 2nd on stadefrance.com.

A portion of the proceeds will be donated to the All Within My Hands (AWMH) foundation created by Metallica in 2017. This foundation funds programs around vocational and technical education in the United States, the fight against food insecurity and for international disaster relief.

Practical information about the concert