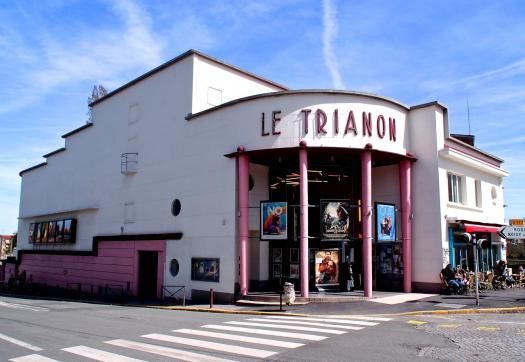 Rebuilt in 1953, made famous for hosting the French TV show "La dernière Séance" animated by the French singer and actor Eddy Mitchell, The Trianon, located in Romainville, proposes a rich and diversified programme. A regular programme rhythmed all year round with events: discussions with film directors or cast members from the films, teachers and cinema critics….

The cinema hall features 430 seats including an orchestra and balcony, Dolby Digital sound, as well as nine seats for PMR (people woth reduced mobility)  (with elevator). The building was designed by Charles Genêtre and dates from the fifties. It has also the satisfaction of being listed as a classified monument.

The cinema is part of the network Cinema 93.

In May 2012, the Trianon re-opened after a complete renovation from floor to ceiling which now includes digital sound and 3D projections, the creation of a space dedicated to workshops, cine-conferences, cine-philosophical meetings and not forgetting the re-opening of the bar featuring the colors of yesteryear (open from Tuesday to Saturday from eleven o’clock until the last showing and on Sunday from eleven to two o’clock for the brunch).