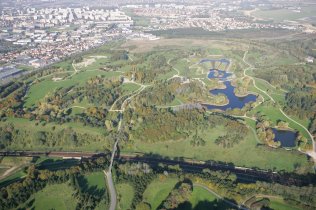 La Courneuve extends over seven hundred and sixty hectares. Parc Departmental la Courneuve set in four hundred acres offers green space to the inhabitants of the town and its visitors. You can visit it by trying the PR11 hiking path that makes a loop in it. This green city is also a city of history and culture with its museums.

La Courneuve, from the latin word “curio nova” or “Curtis nova” refers to “new domain”, the colonists that Suger, the abbot of Saint-Denis settled into that territory. Plaine de France is the first ultimate wheat-growing territory where communal living quarters were first located. La Courneuve featured three traditional villages each maintaining their own distinct character up to the dawning of the twentieth century. To the primitive market-towns Saint-Lucien and La Courneuve packed around the church and Provost, were added the hamlet of Crèvecoeur and Merville Mansion, Champtourtel and Courtille.

Even if the market town Saint Lucien conserved the town hall, the church, the cemetery and schools, it was the name La Courneuve that prevailed to designate the town. The archeological crypt of Saint Julien as well as the Provost can be visited by appointment. The small rural church of Saint Lucien is still surrounded by a small cemetery. In the sixteenth century the current building was built with three naves which is testified by the stone-inscription of 1580 and is classified as a historical monument.

Place of worship and industrial tourism

In 1929, the local authorities carried out significant modifications in order to enlarge a fifth bay to the west. Walls to the south and north are covered with paintings. The church has a wooden cross. The Merovingian sarcophagus, some of which are dotted with human figures, an anthropomorphic sepulcher from the Carolingian era, funerary potteries, an ecclesiastical tomb from the fourteenth century… The church “Saint-Yves des Quatre Routes” the sixteenth construction site by Verdier is also located in La Courneuve.

At number eleven rue de l'Abreuvoir, l'écomusée de La Courneuve preserves the memory of the town. The museum organizes educational activities on archaeological excavations and heritage sites and proposes visits of all kinds. This museum manages the museum equipment in the city, in particular the archeological crypts and historical center resources.

Discover: « La Conquête du bonheur », a fresco done by the painter Mentor in the auditorium of the Maison du peuple -  Guy Moquet. This monumental work completely covers the walls of the house. The wedding hall shows mural-paintings by John Amblard, three large panels representing music and dance; and a fourth giant painting representing the “The Republic and her three children”.

Many companies and factories in la Courneuve and the territory of Seine-Saint-Denis have an open door policy throughout the year. Do not miss these industrial sites and addresses. It is the opportunity to meet the locals, residents, employees, or just to learn more about the rich industrial heritage of la Courneuve, or to discover districts such as les Quatre Routes. Urban walking tours include visits of the town too, an opportunity to discover districts such as “l'Orme Seul” and “cité des 4000”. The tours pass by emblematic buildings such as the Plant Babcock and Wilcox.

Find more information about industrial heritage in the Seine-Saint-Denis department.