Interesting places and sites to visit at Pré-Saint-Gervais 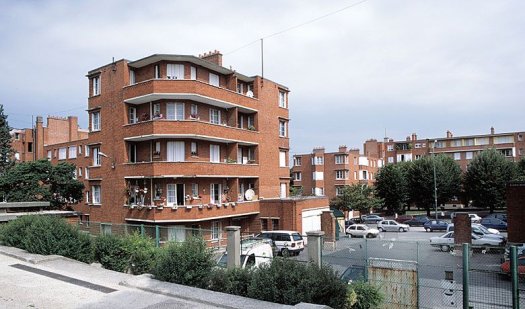 The distracted jogger running on a Sunday morning from Belleville to Canal de L’Ourcq and carried away with enthusiasm, could cross the smallest district (less than one square kilometer) without even noticing it ! Everything at Pré-Saint-Gervais is on a human scale.

The origin of the name comes from latin "pratum" pasture and the martyr Gervasius whose relic was given to the church in the city by the abbey of Saint Denis. Explore the city on foot; let yourself be carried away by its charm. There will always be a story about water to discover. At the bottom of the hills at Romainville, Pré-Saint-Gervais benefits from abundant springs. First records of this date from the twelfth century. It was at this same period that a deed of the sales of acres of vineyards Pré Saint Gervais, part of the abbey of Saint-Denis were made known. The mode of water distribution at that time was the establishment of canal drains known as “pierrées” in the shape of closed troughs.

Parisians had long thought to take advantage of this wealth for their consumption and the religious orders of Saint Lazare tried to appropriate the spring (waters) from the Pré pastures. These waters that flowed right up to their monastery also supplied les Halles. Many “regards” (a stone-built structure like a fountain where water passed from the hills of Romainville and les Lilas) were built with regularity and two are still visible today and listed as historic monuments. The most important one with a square form on one level is located in the center of the medieval town. It served as a public fountain and was six meters high. A mark indicates 70.82m above sea level. Surmounted with a pine cone above a niche in the shape of a semi dome vault (cul de four) an engraved plaque dates it from the reign of Louis XIII. In times of drought, only the richest concessionaire who rented the lower openings enjoyed the precious liquid. The “regard” called “Trou Marin” or “Morin” now only reveals its heavy roof at the foot of the picturesque Sente des Cornettes.

The district lost most of its territory during the nineteenth and early twentieth century during the creation of the town of Les Lilas and the Parisian fortifications lines. These successive amputations forged the Gervaisiens (Pré St Gervais inhabitants) with the mental of an “Asterix village”. You will immediately be attracted by the church Saint-Gervais-Saint-Protais the current headquarters of the Social welfare office and which was, until the Revolution, the church of discord. They had to brave the often impassable muddy roads to get there. Rebuilt twice since the eleventh century, it was abandoned in 1920 to be replaced by the current church de la Sainte Famille (rue Paul de Kock), where you will find a baptistery and a Christ crucifix from the seventeenth century.

Some typical houses still bear traces of a rural past that have lasted through the times such as the buildings of the Vaysse Institution (au 94, rue André-Joineau) dating from the seventeenth century. It is said that the king Henry IV came to hunt in the park, vestige of the antique forest of Bondy. The city hall is a converted resort mansion. The first mayor of Pré Saint Gervais in the eighteenth century was a wine merchant, owner of a guinguettes-open-air-café where Danton used to come and enjoy. It now hosts the works of the painter Alphonse Quizet in the wedding hall. In 1904 Jean Baptiste Sémanaz first socialist mayor of the Parisian Ile de France territory welcomed Jean Jaurès several times here who, in 1914 on the Butte du Chapeau Rouge made a significant and ominous speech against war. Villa du Pré (Grande avenue) is an calm oasis just a few metres away from the ring road. Walk through the semi pedestrianised streets among some 200 houses and little gardens.

Urbans strolls and industrial visits are organized throughout the year in Pré-Saint-Gervais and in the nearby cities : Pantin, Les Lilas, Bobigny, Romainville... Do not forget to sign up for these themed tours to discover the heritage of all these towns in the greater Paris area.