By walking along the streets in Paris or La Courneuve, you will meet men and women who left their country of origin to settle in France, whether it be only for a few months or forever. 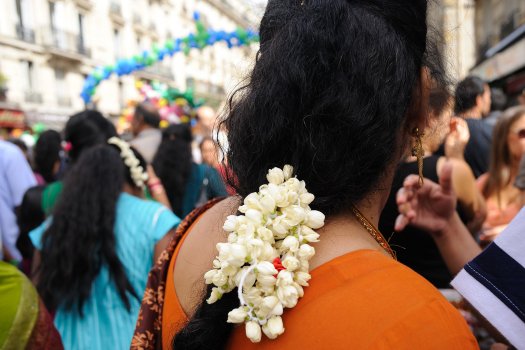 The Ganesh Festival is held every year on the Sunday of August, in the 18th arrondissement, passing by the rue du Faubourg Saint-Denis. © did.van

The different shop windows present us multitude of stories from the past and the present, and give us a taste of what could become these neighborhoods. Posters taped between two store fronts represent pages from a journal: culture, religion, politics, death notice, pieces of life… On our way, we meet people coming from the Indian sub-continent: Tamils from Sri Lanka, Pakistanis from Punjab and Bangladeshis.

If the word community is used, it is to express something common to everybody:  a story, a language, a religion… But not to forget that in a community everyone has a singularity and a particularity.  Like a patchwork it forms a pattern, a harmony and by getting closer we distinguish every little pieces of different sizes, colors or shapes. Everybody has its own story: reasons to settle in France are different (economic, social, family, escape wars…). Everyone leaves a print in the street in its own way…

In the 18th century, the Maharajahs and their families, Indian artists and intellectuals, came to Paris to settle there for a few months, ideally in the chic neighborhoods of the capital city, to enjoy the Parisian cultural and social life.

From the 19th century, gemstone traders discreetly set up in the 9th arrondissement, and later on Indians coming from Pondicherry started to open shops and restaurants in working-class neighborhoods such as the 10th or 18th arrondissements.

The seventies mark the beginning of the Indo-Pakistani history of the passage Brady and the settlement of shops managed by Pakistani families in the rue du Faubourg Saint-Denis.

Today, the Pakistanis settled for quite a long time between porte Saint-Denis and Gare de l’Est close have to close one after another their stores: groceries, restaurants, travel agencies…

The new generation born in France has other ideas. Because rents are getting more expensive and there are fewer clients, the neighborhood and its inhabitants require change in line with their needs.

More recently, La Chapelle neighborhood started to develop thanks to stores managed by people coming from Sri Lanka speaking Tamil. This little area looks like a small colorful world stuck between Gare du Nord and the elevated railways. It is by far the most colorful street of the city: fuchsia, shades of blue, red (the wedding color), gold…

Rue du Faubourg Saint-Denis concentrates small neighborhoods: everybody has his/her own language (Urdu, Punjabi, and Tamil), writing or religion that you can discover through logos enlivening the street. From La Reine du Kashmir to Le Palais des Rajpouts, stop at the Bangla Café where people from Bangladesh recently set up. You can also discover pictures of Lakshmi, Hindu goddess of wealth, fortune and prosperity but also Ganesha, and other…

Indian restaurants and their specialties also tell us beautiful stories and extend our journey. The different flavors from the Indian sub-continent cuisine mix together along the sidewalk. Between tandoori chapati from Northern India and masala dosa from the South of the country, the spices attract us for a flavored journey with no boundaries.

Book your visit about India in Paris 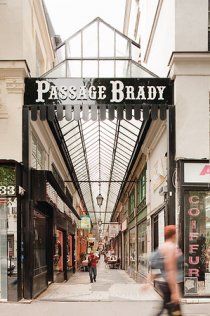 Both the story and the stroll continue until the last stop of the subway line 7, on the other side of the ring road, in La Courneuve.

Seine-Saint-Denis is a department which welcomes since a very long time numerous communities coming from different countries which constitute the Indian sub-continent.

The Paul Vaillant Couturier avenue crossing the city of La Courneuve is as an expansion of the rue du Faubourg Saint-Denis: people live in La Courneuve and work in Paris. The subway line 7 links the two cities.

Because rents are cheaper than in any other cities in the Paris region and due to the proximity with Paris, a lot of Pakistani and some Indian families settle in La Courneuve in the eighties. Some of them from Punjab are Sikhs, even if the majority of Sikhs are mostly settled in Bobigny or Drancy, and more recently in Le Bourget. 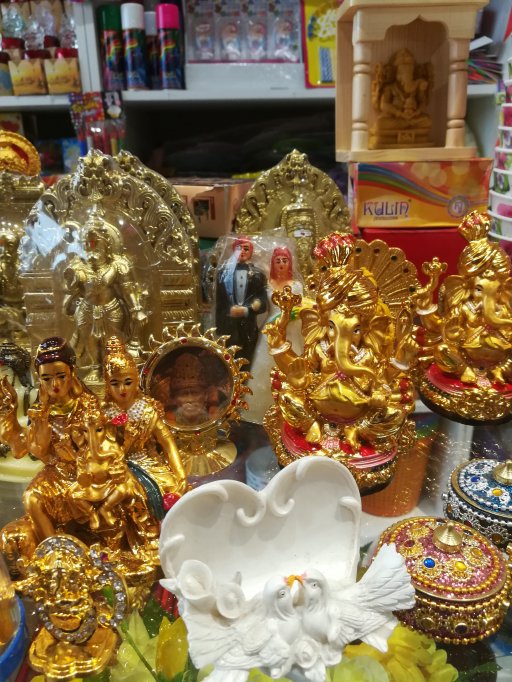 In La Courneuve, Pakistanis opened shops: groceries, butcher’s shops, restaurants… They also created wholesale trade firms located in the business park of the city. Yet, the Sri Lankan community is the most present here. One of the libraries offers CD, DVD, books and magazines in Tamil. Furthermore, other stores started to open: beauty salons, haircuts, clothing shops…

The young generation gets involved in the life of the city, several associations are created: Bharatanatyam dance, violin classes, French and Tamil classes, cricket classes…

Cities are changing, the rue du Faubourg Saint-Denis neighborhood like other ones in Paris welcome new inhabitants with new stories. The Indo-Pakistani history is now told in the past, and the most recent quarter of La Chapelle is also facing transformations… as well as on the other side of the ring road.

There is a thousand of ways to tell the story about the city and its inhabitants. The Anardana association offers to visitors to discover the city like a story. It is up to you to continue the visit in your own way and to create new stories.

Find out about other ethnic groups in Paris by doing visits with local english speakers.