The French Guinguette-spirit on the banks of the canal!

Rediscover the warm guinguette-atmosphere of restaurants and dancing to accordion music along the canal de l’Ourcq, in Pavillons-sous-Bois, on board the barge Chat qui Pêche! This particular barge recalls the history of the city, that, until the sixties, hosted several dance halls (one of the guinguettes was called  Le Chat qui Pêche). Experiment a journey through time all while staying dry thanks to this barge moored along the canal.

Embark on this red jewel and float for a few hours in a warm and retro atmosphere. Get carried away by the team of volunteers and their indisputable enthusiasm and “joie de vivre”.

Le Chat qui Pêche is also a place for different activity themes like Latin dance classes every Tuesday evening or local gastronomy on board. So embark on the "Chat qui Pêche" for a fun-filled excursion with music and dance.

Come and dance every Sunday during the Guinguette-balls and enjoy your favorite dish of mussels and French-Fries! 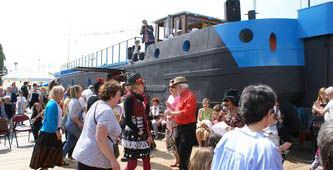 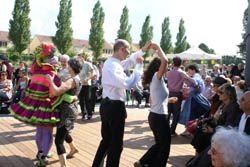 How to get there, nothing more simple! Use the summer festival shuttles on the Ourcq Canal ! and get off at Aulnay-sous-Bois / Pavillons-Sous-Bois.

To replenish supplies for the barges, stalls were installed on the banks of the canal. Later, they were transformed into outdoor bars. With the French trend of possessing a second residence or country house, Parisians are used to coming to “spend their Sunday” on the water’s edge and thus spend more time at Guinguettes.

The name given to the bars comes from "guinget", a white wine harvested on the hillsides around Romainville and Belleville. Le Guinget was not a famous beverage but it  was cheap as it was exempt from taxes applied in the capital.

In Pavillons-sous-Bois, three Guinguettes were very popular. One of them was called Le Chat qui Pêche which was the name chosen for the barge. The barge was bought by the municipality in Pavillons-sous-Bois in March 2003 and a lot of work was needed to transform it into a guinguette featuring a versatile cultural center.

Don't miss the Antipode, the Grande Fantaisie, the Anako, the Barboteur, the Library barge or the Cinema barge.